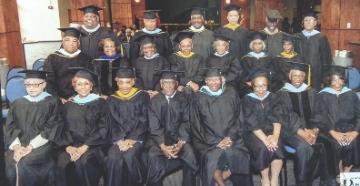 We salute and give honor to the graduates of Miles College 50 years ago. They are the ones and many more before them who paved the way for many students today. They are the foot soldiers who struggled for their education and became some of Birmingham’s best educators, teachers, lawyers, doctors, supervisors, principals, and many other professions in the City of Birmingham and other cities and states. The graduates received Honorary Degrees at Miles College.
Hats Off!!! To Miles College Graduates 50 Years Ago.