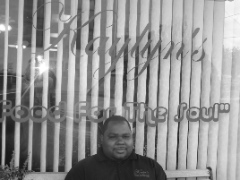 By Charlene Holmes
Bessemer native Mr. Rodricus Hunter opened Kaylyn’s Food For The Soul Restaurant out of necessity.
“I used to always want soul food, but I’d have to go all the way to Birmingham to get it. So, when the opportunity presented itself, I just took advantage of it,” Mr. Hunter explained.
He said people often ask him about the name of his restaurant. “I named the restaurant after my 7-year-old daughter, Kaylyn,” he mentioned.
“I started Kaylyn’s at (the age of) 26 and had no idea what I was getting into – but I had a golden vision. Now, four years later, we’re still going strong,” he said.
Mr. Hunter added, “We thank our customers for supporting us since day one.”
“What makes Kaylyn’s better than other restaurants is freshness. “We use everything fresh.  No canned food. Some of our favorite dishes are baked or fried chicken, greens, yams, macaroni and cheese, and oxtails. We are known for our hot water corn bread. People think the corn bread is a pancake, but it’s actually fried,” he confided.
Mr. Hunter continued,”We have prices ranging from $5.30-$10.50. Some of our dishes are under $5,” he added.
Other things that make Kaylyn’s unique are “our good customer service base.  When you’re at Kaylyn’s you feel like you are at home. The atmosphere is good and clean,” he added.
Mr. Hunter said he plans to “franchise eventually.  I have had several offers, but none in my favor,” he admitted.
“We are working on building a Kaylyn’s near you,” he smiled.
For fun, Mr. Hunter said “he enjoys being with his family that consists of his wife, Camisha, his 7- year-old daughter Kaylyn and his 3-year-old son, Blake. We love doing adventurous things,” he added.