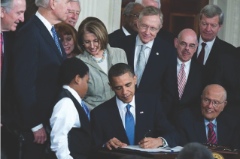 Birmingham, AL – Health Insurance Marketplaces, the link to benefits to affordable health care, will be launching October 1, 2013 for open enrollment. Birmingham Councilmembers are encouraging eligible residents to sign up and seek information for the benefits.
President Barack Obama and Kathleen Sebelius, Secretary of Health and Human Services, held a conference call with state and local elected officials to discuss the launch of the Marketplaces. On the call, the President stressed the importance of getting the information about open enrollment out to the local communities, especially the uninsured and young people, who are less likely to have coverage.
Councilor Jay Roberson, who was on the call, said: “It is time for us as elected officials to work collaboratively to make sure we build awareness among the constituency on how to apply for affordable healthcare.”
Councilor Roberson is encouraging his colleagues and neighborhood leaders to form partnerships throughout the community and work together over the next six months to get as many people signed up for affordable healthcare as possible. “I also challenge my colleagues to take leadership in each of their districts, to get the word out, in any way that they can, to get their constituents to sign up,” said Roberson.
The Marketplaces open on Tuesday, October 1, 2013, and if residents sign up before December 15, 2013, their benefits will begin January 1, 2014.
Councilwoman Sheila Tyson, who was recently nominated as a national champion for change for her health Education efforts by Secretary Sebelius, added: “The first part of open enrollment ends in December but the second part ends in March, 2014.” So the push is to sign up as many residents as possible in six months.
Residents can inquire about eligibility and the different options available in Alabama at www.healthcare.gov. A telephone number, available 24/7, is also set up to help residents complete applications at 1-800-318-2596. Navigators and certified application councilors are also in communities across the country. Plus, a team of regional directors has been deployed to assist locally.
Councilor Tyson said several events are planned locally to help educate residents on the new healthcare opportunities. On Tuesday, ClasTran will be picking up senior citizens from various locations to take them to UAB for classes on the new healthcare law.