For ASU’s football team, focus is the name of the game and, according to head football coach Reggie Barlow, is a key component to being ready for any game, particularly the Magic City Classic. As the Magic City Classic approaches, Barlow said his team has plenty of it.
“Our focus has been good this week,” head coach Reggie Barlow said. “The guys have been focused on the task at hand. I think they understand what we’re up against, and we’re looking forward to the opportunity to see how we measure up.”
Barlow said the coaches use a combination of recordings of motivational speakers such as Dr. Kevin Elko and Eric Thomas, as well as plays of their opponents, to help motivate the team.
“Those are motivational quotes that have positive messages,” Barlow said. “[It’s] just a combination of words and visuals and of course actions by going on the field… I think one of the things that we definitely always talk about is playing with passion, playing with enthusiasm.”
As for the advice he gives his team, Barlow said his approach is helping his team to turn stumbling blocks into stepping stones.
“Live in vision, not in the circumstance,” Barlow said. “The ball is going to be played down, it’s going to be kicked off. We expect in a perfect world to make all the plays, but we know in the real world that that’s not going to happen, and there may be a time where that team gets the first down, or that team scores a touchdown, or we’ll fumble the ball. At that point we must think about what’s the next task instead of living in circumstances and allowing out mindset to dwindle or getting in a frenzy, so it’s about living in vision, not in circumstances. 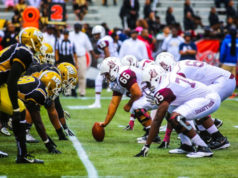 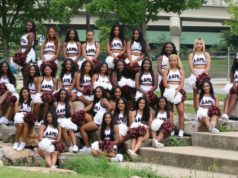 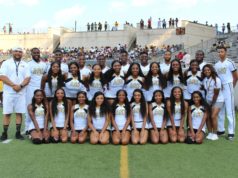