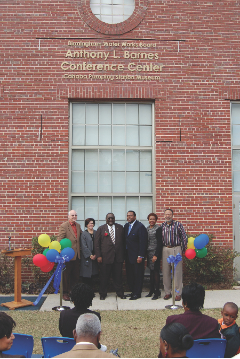 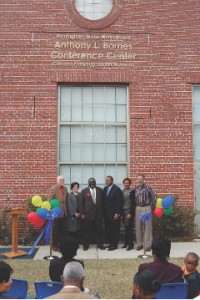 Former BWWB Director commemorated for his years of service

In honor of former Birmingham Water Works Board (BWWB) Director Anthony L. Barnes a dedication ceremony was held November 21, 2013, at the Cahaba Pumping Station Museum commemorating his works through the unveiling of the facility’s new name, now the Anthony L. Barnes Conference Center.
“This great organization has great leadership and I want to thank the great leadership of Mr. Jackie Robinson, Mrs. Ann Florie, Mrs. Sherry Lewis, Mr. David Herring, and Mr. George Munchus. I believe behind every great man there is a great family and great friends. If you don’t have people behind you, you can’t be anything in this world. When you have support you know someone always has your back,” said Barnes. “I did my job with a lot of passion, and I am humble today. You all have made me so proud, this honor is still something I am amazed about.”
Former colleagues, family, friends, and more assembled to recognize the “foot soldier” for his continuous unapologetic spirit in placing customer, as well as employee issues at the forefront. Barnes was the first African American to hold the position of Chairman for the BWWB in 1998, after having been appointed to the board in 1991. Immediately upon assuming his position Barnes set out to correct wrongs that he had seen. Under his leadership a push came to demolish the utility’s Cahaba Pumping Station due to its need of numerous repairs; however, Barnes convinced members of the board to renovate the facility instead. Additionally, Barnes contributed to the local community through addressing criticisms that the board did not give enough work to minority-owned businesses.
“He was definitely a foot soldier in bringing the BWWB from where it was to where it is today,” said current BWWB Chairman Jackie Robinson. “He made sure that the qualified individuals were promoted and given opportunities they were deserving of. That’s the true leadership value that Anthony brought to the table. To do what’s right, do it as soon as he can, and to do it unapologetically.”
Barnes worked for the BWWB for more than 21 years, and currently serves as President and Chief Executive Officer of Barnes & Associates, P.C. REALTOR.
“He deserved this, when he joined this board years ago he had a hard job to do. He brought the BWW a long way, and I have learned so much from him,” said BWWB First Vice-Chairwoman Sherry Lewis. “It is just wonderful that the building will be in his name because he has done a great work for the board. I am proud to be a part of the BWW, partly because of him. His compassion, his strength, his love for people and the board, as well as employees, he has shown that.”