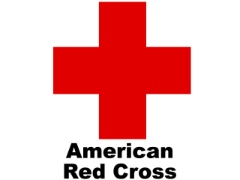 Effort part of overall Red Cross response to 146 large disasters nationwide
HOOVER, Ala. — In a year that had deadly tornadoes, fierce wildfires and destructive floods in many states, the Alabama Red Cross responded to more than 2,000 disasters in the region, part of the 146 large disaster relief efforts led by the American Red Cross in 42 states and territories between Jan. 1 and Dec. 1 in 2013.
“This year, the Red Cross continued to serve the people of Alabama through the dedicated work of its staff and volunteers,” said Mark Beddingfield, Executive Officer for the Alabama Red Cross. “2013 was a busy year and we are so very thankful for everyone who supported our efforts to help those in need.”
Here at Home
The Alabama Red Cross responded to a number of disasters in 2013, to include the following.
•    Nearly 6,500 residents were assisted with their immediate needs after more than 2,000 home fires damaged or destroyed their homes.
•    Nearly 500 residents were assisted with their immediate needs after severe weather moved through parts of Alabama in April.
•    Red Cross volunteers also provided canteen services and mental health services for emergency workers and victims after several man-made and natural disasters including:
◦    Several search and rescue/recovery operations in Talladega, Morgan, Elmore, Greene, and Montgomery counties.
◦    The hostage standoff near Dale County in January.
◦    The Amtrak wreck in Jefferson County in May.
◦    The UPS cargo plane crash in Jefferson County in August.
◦    The gas explosion and apartment fire in Jefferson County in December.
Behind the Numbers: Mobilizing Responses for Big Disasters
The Red Cross disaster responses across the country in 2013 included:
•    16,700 workers – many of them volunteers – providing care, comfort and support to those in need.
•    89,000 contacts by specially trained workers with disaster victims who needed mental health support or health services, which is more people than the amount of travelers who pass through Chicago’s O’Hare International Airport on an average day.
•    1.8 million meals and snacks, the equivalent of feeding the entire population of Philadelphia lunch in a day.
•    29,000 overnight stays in shelters for people forced from their homes by disasters, enough to fill the largest hotel in New York City for more than two weeks.
•    1 million relief items distributed, including more than 33,700 toothbrushes.
•    $74 million to more than 60 nonprofit partners to help people and communities recover from Superstorm Sandy.

Flooding
In April, flooding struck 10,000 homes in 10 counties in Illinois. More than a thousand Red Cross volunteers provided shelter and food to displaced families and delivered relief supplies to those returning to waterlogged homes. In September, almost a half-years’ worth of rain fell in just three days across several counties in and around Boulder, Colo. Red Crossers responded and served more than 204,000 meals and snacks, handed out more than 249,000 relief items and provided about 15,000 health and mental health contacts. The Red Cross also provided a total of 3,800 shelter stays for people forced from their homes by the flooding.
Tornados and Severe Storms
The largest and most deadly tornado outbreak in 2013 came in Oklahoma in May, when a series of tornadoes ripped through the state, and Red Cross workers were there to comfort the survivors, including the community of Moore, Okla., where two elementary schools were struck by a deadly EF-4 tornado. More than six months later, the Red Cross continues to help residents through long-term recovery centers and other community programs.
In addition, Mississippi was hit particularly hard by severe spring storms for the third year in a row, including a tornado that severely damaged the Red Cross building in Hattiesburg in February. Again in April, the Red Cross was there, opening shelters, providing food and water, and helping survivors recover. In November, dozens of tornadoes cut a path of destruction through the Midwest, damaging more than 1,000 homes and leaving hundreds of thousands without power during a cold snap.
Wildfires
When wildfires threatened communities, the Red Cross offered evacuees a safe place to stay and supported first responders. In total, the Red Cross mobilized more than 2,000 workers to support 10 large wildfire responses in eight states during 2013, such as Colorado, Arizona, California and New Mexico.
Home Fires
It’s not just the high-profile disasters that left thousands of people in need this year. The Red Cross also responded to more than 52,000 home fires across America, helping 226,000 people get back on their feet. For those who have suffered a home fire, the event can be just as devastating as the high profile disasters that get a large amount of national attention. Regardless of the size of the event, the Red Cross responds in the same way – with shelter, food and emotional support.
International Disasters
In 2013, the American Red Cross assisted an estimated 1.3 million people affected by disasters in 24 countries outside of the U.S. These included storms and floods in the Philippines, Argentina, Bangladesh and Nigeria. Red Cross workers continue to respond to the ongoing humanitarian need created by the civil unrest in Syria, as well as needs caused by conflicts in other areas around the world. The Red Cross responded to food insecurity issues in Malawi and Zimbabwe and continued our earthquake recovery work in Haiti that has been ongoing since 2010. Additionally, the Red Cross continued its vital work in reconnecting families separated by conflict and disaster, reconnecting 886 families this year alone.