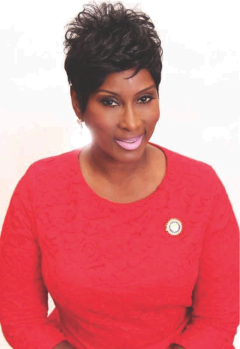 Rep. Juandalynn Givan, House District “60” proudly announces her candidacy for re-election to the Alabama House of Representatives on June 3. “It is my esteemed honor to announce that I will be seeking re-election to House District “60” in 2014. I have been so blessed to serve all the people of House District “60” and the State of Alabama.” House District “60” is comprised of  the following cities and neighborhoods: Forestdale, Ensley, Pratt City, College Hills,  Brookside, Gardendale, Fultondale, Graysville, Bush Hills, Southside, Smithfield, and Graymont.
Since being elected, Givan notes that she has been honored to serve as a vessel for the people, to fight for educators, and education, to sponsor and co- sponsor legislation for small business incentives, land banking, tax incentives, Medicaid Reform, and job creation.” I have fought for the oppressed and disenfranchised, standing and serving as a voice for the people leading with “Voice! Vision! and Leadership!”
Givan is a very proud graduate of Miles College where she received her Bachelor of Arts Degree in Political Science, and the Miles School of Law where she received her Doctorate of Juris Prudence from the Miles School of Law.
She most recently led the fight to save George Washington Carver Cemetery which closed suddenly in September 2013, as well as leading the fight to stop several post offices in District “60” from closing. Givan is no stranger to hard work, she has sponsored and was successful in having passed several pieces of legislation, most notable was the amendment to include a mandatory sentence for habitual offenders to the Domestic Violence Act during her first year as a legislator in 2011 and then in 2013 Givan sponsored and received bi-partisan support for the Caylee’s Law Bill and legislation granting the City of Birmingham as a Class 1 municipality to change the start of its Fiscal Year from July to October. “This was a rare victory and accomplishment for a freshman legislator to be able to have within one legislative session to get multiple pieces of legislation passed,” said Givan.
Givan sights her ability to work both sides of the aisle as one of her biggest strengths. Since being elected, she was named by her peers;  Freshman Legislator of the year by the Democratic Caucus, Legislator of the Month, Outstanding Leader by the Domestic Violence Council, as well as numerous awards and recognitions.
Upon her re-election Givan will focus on the following:
•    Work to provide visionary and servant leadership to District 60
•    Work to repair our damaged economy
•    Work to identify and address problems that impact District 60
•    Work to establish a cooperative bipartisan relationship
•    Work to reform Medicaid
•    Work to rebuild our neighborhoods and our educational system in District 60 by creating student mentoring programs
•    Work as an advocate for new Alabama Constitution Work to establish and sponsor bills that are fair and balanced
•    Work to bring new jobs in industry by working with ADECA and other state agencies
•    Work to bring about collaboration and regional support for accessibility and reliable mass transportation
•    Work to secure grants for affordable housing
•    Work to enhance senior citizen recreation in independent living programs
•    Work for vocational educational programs to help prevent student drop out
•    Work to have quarterly town hall meetings for citizens and stakeholders in District 60
•
Givan looks forward to running a very aggressive campaign; she is the owner of Givan & Associates Law Firm. Most recently she expanded her practice to include governmental relations and program management consulting services. She is also a mentor and public speaker and is no stranger to public service. Upon graduating from Miles she became a Political Appointee serving as an Administrative Cabinet Member to Birmingham’s first African American Mayor Dr. Richard Arrington Jr., where she was responsible for Capital Projects and Development in the City Center. She also served as HOPE VI Coordinator for the Housing Authority of the Birmingham District HOPE VI Revitalization Projects at Metropolitan Gardens and Tuxedo Court. She also provided political commentary and analysis for the Birmingham View Television which aired on WABM My/68. Givan works in the community to improve the quality of life for all citizens. She is recognized as a leader in the community by the NAACP, Alpha Kappa Alpha Sorority Incorporated, Omicron Omega Chapter, and Tri-County Chapter of the Links Incorporated, Museum of Urban Arts Board Member and the United Negro College Fund (UNCF) where she served as the inaugural “For the Love of Learning Masked Gala Chair.”  Givan was also named professional woman of the year by the NAACP and received the Margaret Tucker Humanitarian of the Year Award.