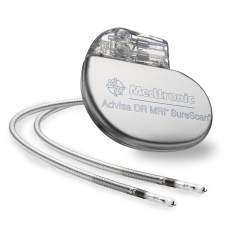 By Jessica Jones
There’s good news for those who have pacemakers and have experienced a stroke or are at risk for one: the FDA has approved the Medtronic SureScan Pacing Systems, the first and only pacemakers that will allow patients to have an MRI scan anywhere in the body, including the brain and chest. This news comes as the nation observes National Stroke Awareness Month in May.
Typically, patients who have artificial pacemakers are unable to receive MRI scans, which can be beneficial to patients who are suspected of having a stroke. The new technology allows patients to receive MRI scans without interfering with the patient’s pacemaker, said Dr. Raashid Ashraf of Cardiovascular Associates in Birmingham.
“Pacemakers have been around for over 100 years,” Dr. Ashraf said.  “And among the implantable pacemakers, they all do the same thing until recently where the technology has gotten to a point where one has offered an edge over another because of the utilization. We have MRI machines that are increasingly used for the diagnosis of stroke, heart disease, and a large number of patients, up to 2,000 patients in the U.S. alone, were denied this modern technology.”
Stroke patients are usually diagnosed through the combination of a clinical examination and either an MRI or a PET scan, an imaging test that uses radiation. With the MRI being less harmful and able to produce better imagery than a PET scan, yet unavailable to pacemaker patients, the answer to the limited options was to create a pacemaker that could withstand the magnetic field of the MRI, Dr. Ashraf said.
Making MRI technology available to patients who have artificial pacemakers is crucial in the event that the patient has a stroke, Dr. Ashraf said, as early detection is the key for a positive outcome.
“A stroke is just like a heart attack, time is critical for the early diagnosis and treatment of heart attacks,” he said. “The same thing applies to strokes. A blood vessel is clogged in the brain and it causes a brain attack, so to say, and the earlier you diagnosis it, the earlier you get that artery open and start the blood thinner treatment, the more brain tissue can be saved, and we know if you diagnose the stroke early and provide proper treatment early on you can have a better clinical outcome. There is less damage to the brain tissue and people come out with less handicaps and less instability so you have to be able to stop the process of evolution of the stroke as soon as you possibly can for the patients to have a better outcome.”
Having a pacemaker doesn’t put a patient at more of a risk for having a stroke, but age certainly can.
“The majority of the patients who require pacemakers are older than 65 and the majority of patients who have strokes are also over age 65,” Dr. Ashraf said.  “So it’s a problem that happens in elderly folks and these conditions tend to coexist in that group…that’s why it’s important that a pacemaker should not interfere with the patient’s ability to receive certain diagnostic testing like an MRI.”
When a doctor decides that a patient should receive an artificial pacemaker it’s important to consider future need for an MRI including, but not limited to heart related issues.
Patients and physicians should consider the patient’s past health and evaluate the other health issues that might require the use of an MRI scan such as Alzheimer’s, previous MRIs, back or neck problems dementia, or cancer, Dr. Ashraf said.
“We know that for the lifetime of the pacemaker patients are 50-75 percent more likely to require an MRI in their lifetime,” he said. “So…we need to make patients aware and the public aware that there is a technology that is available for the early diagnosis and detection of stroke and we have to make sure that if someone is in a position to have a choice to have a pacemaker that they should pick the one that should not interfere with the future treatment of stroke or the future requirements for an MRI or a non-heart-related problem.”