NASHVILLE, Tenn. (TSU News Service) – A visit to the Pro Football Hall of Fame game in Canton, Ohio, proved to be better the second time around for the Aristocrat of Bands when they became the first collegiate band to perform the halftime show in the game’s 51-year history.
The TSU marching show band, the only collegiate band ever invited to perform at the Hall of Fame game, was first invited in 2011 when TSU Tiger great and former Chicago Bear Richard Dent was enshrined. However, the Band never made it to the field due to the NFL lockout.
But like a scene from the 2002 movie, “Drumline,” the dynamic group wowed fans with their high-energy show in the Pro Football Hall of Fame stadium parking lot. While hundreds of fans showed up for the performance, it just wasn’t the same as performing at halftime, a show the AOB has become known for both in NFL and college stadiums across the country.

“It was a little disappointing but we were fortunate to be invited back a second time, this time for Claude Humphrey, the second TSU Tiger enshrined into the Hall of Fame,” said Dr. Reginald McDonald, acting director of Bands. “It was important for us to represent the University and to celebrate the achievement of one of our family members.”
The performance by Band, according to officials at the Pro Football Hall of Fame, is the first time a University band has played in the nationally televised halftime show at the annual enshrinement game that wraps up a weekend of festivities and induction ceremonies.
They can now add this honor to their already impressive list of firsts, including the first HBCU to play in a presidential inaugural parade in 1961; the first university, Black or white, to play an NFL halftime show in 1955; and first HBCU invited to perform at the high school Bands of America Grand National Championships in Indianapolis last year.
“It really was an honor to not only perform for the enshrinement of one of TSU’s legendary football players, but also to bring part of the University to Canton and share our showmanship with the country. It’s something our students will never forget,” added McDonald.
The excitement started as soon as the 294-member Aristocrats ran onto historic Fawcett Stadium, a high school venue that seats only 22,000 fans. When the announcer asked the crowd if they were “ready to start the show,” the stadium erupted into deafening cheers and applause as the band broke into a rendition of “Happy” by Pharrel Williams. The eight-minute show concluded with the introduction of Humphrey, Dent and TSU president, Glenda Glover. 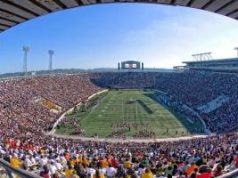 Magic City Classic Moved to the Spring. What That Means for the Rivalry 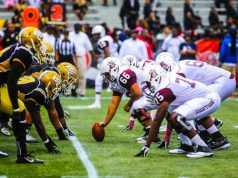 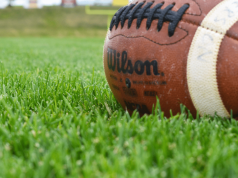 No Youth Football for 3,000 players in Birmingham this fall