I’m starting this article by retracting a statement in my August 14th column. My article stated that Barnett Wright said Sheila Smoot would win when in fact, the article went on to state how she could win.

While I’m apologizing I also wrote an article stating that General Bowman ran the worst campaign I have ever witnessed. My reasoning was that the people who worked for Bowman had more experience in the political arena than any two County Commissioners combined. They had been involved in the political community during and before the Arrington administration, I was just shocked how they were disseminating information regarding their employer.

There are a lot of people who take politics personally. I am not one of those persons. In politics you win some and you lose some and you make the decision to move on. George Wallace believed, and I agree, in politics if you win or lose, the first people you call are the people who did not support you. If I were working for General Bowman I would have reached out to Arrington, Mayor William Bell and any other leader of organizations who endorsed other candidates, explaining to them I’m sorry I did not get their support, but I wish to assure you I am not upset about it. Everyone has the right to choose whom to vote for. I would like to have you on my team and I’m looking forward to gaining your support in the next four years.

Sandra Little Brown and Sheila Smoot carried out a long, drawn-out battle with only a few votes  separating the two. Sheila had every right to pursue legally to overturn the election to find if there were any mis-steps by Brown and her organization. If it has not already happened, I think that Sheila and Sandra should sit down and break bread together. Whatever they can do to help each other should be done.

The City of Birmingham and Jefferson County have a long road ahead. The only way they can overcome this is to build a big tent, bring everybody under the tent, and to find out what it takes to move the city and the county forward.

According to the administrative staff of the Miami Central football team, someone from Hoover, Ala. sent a racist letter, a couple of days before these two teams met on National television. Both teams are nationally ranked. The writer used the n-word and referred to fried chicken and Kool-Aid. (I’ve got to tell you that fried chicken and Kool-aid are two of my favorites.)

Anyone who did this has got to be the dumbest person of the decade. I do not believe that the people of Miami Central High School should have released this information. Anyone could have written this letter. It didn’t necessarily come from someone in Hoover. They should accept it coming from a moron and move forward with the game. You are affecting the lives of young people, getting them distracted on an issue that has no relevancy.

It’s impossible to write an opinion column and not discuss the shooting of Michael Brown. There’s going to be all kinds of comments made on both sides of the fence. Nearly six out of 10 African Americans say the shooting was ‘unjustified.” The vast majority of Americans are keeping an open mind. A CBS/NYT poll showed that 64 percent of Americans said they didn’t have enough information to determine whether Officer Darren Wilson was justified in shooting Brown.

We have heard all types of allegations. Fifteen days out we have not heard from the officer’s lawyer or the officer who did the shooting. All we know is they appeared before the Grand Jury and have not heard the decision made.

Sharpe-Jefferson: Achieving something far greater than we can imagine 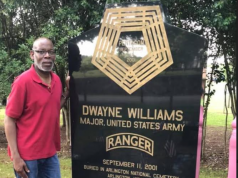 9/11 Remembrance From Birmingham: ‘My Brother Was Killed at the Pentagon’ 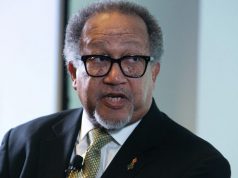