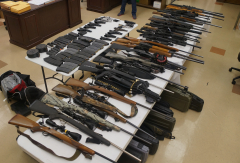 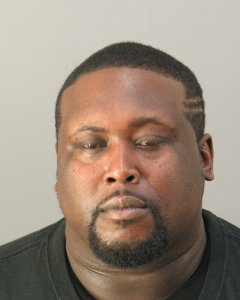 On Wednesday the Birmingham Vice / Narcotics unit executed a Narcotics search warrant in the community of Thomas (188 2nd Street, Thomas) in Birmingham, after a month long investigation into the sale of illegal narcotics and firearms. During the execution of the search warrant, detectives seized forty-one firearms ranging in types from SKS assault rifles and shotguns to Glock pistols and .410 revolvers. Detectives also seized several thousand dollars in cash and different types of controlled substances.

One male, who was the focus of the investigation, was home at the time the warrant was served. The defendant was charged and transported to Birmingham City jail. The defendant will be held at the Birmingham City Jail until warrants are signed at the District Attorney’s Office. Reginald Johnson (B/M, 38) is charged with Unlawful Possession of a Controlled Substance and further charges relating to the firearms are still under investigation.
“Anytime you seize this number of guns from one location and take them off the street, it has a positive impact on the community.” Detectives will present their case to the District Attorney’s Office as it pertains to the seizure of these firearms.