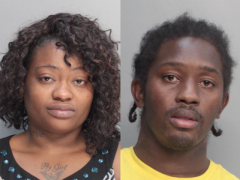 Tyrell Johnson, 25, and his girlfriend, Josephine Laidler, 26, (both pictured above) reportedly told Hialeah, Florida police officers that they saw nothing wrong with leaving their one and four-year-old children in their running car shortly after midnight Thursday while they went to play the slot machines.
Now the couple is charged with child neglect and have been ordered to have no contact with their children while the Department of Children and Families delves further into the case, reports WSVN News.
A surveillance camera shows a Hialeah Park Casino security guard walking over to the parked car belonging to Johnson and Laidler, then using a flashlight to peer inside the vehicle.  The guard is seen looking startled as she discovers the two young boys asleep and alone in the running car that was reportedly left unlocked.
When police were summoned and were directed to the children, they paid the parents a visit inside the casino. Both Johnson and Laidler were placed in cuffs and taken into custody.
According to Hileah Police Lt. Carl Zogby, he hopes that both Johnson and Laidler receive some much-needed therapy for their alleged neglectful deed, telling WSVN, “I hope they make that one of the conditions or part of the conditions before they release the children back to their parents: perhaps, having them seek help. If they do have a gambling problem that compels them to neglect their children to leave them unattended, alone in the car.”
Meanwhile, DCF reportedly has no prior complaints regarding Johnson and Laidler.