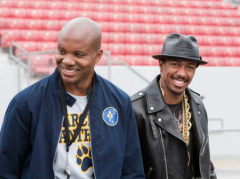 ATLANTA (AP) — Nick Cannon remembers when youngsters often approached him, telling him that the 2002 film Drumline influenced them to attend a Historically Black College and University.
Cannon believes the sequel could have the same impact.
“People told me back then they went to an HBCU because of that movie,” said Cannon, who starred in the original film as Devon Miles, a teenage drummer who went from a New York high school to the fictitious Atlanta A&T with the hopes of claiming drum section leader. “That film made being in a marching band cool. I think this new one could have the same effect.”
Drumline: A New Beat, which airs at 9 p.m. EDT Monday on VH1, continues to tell the story of marching band members at Atlanta A&T. But this time, the spotlight is on Alexandra Shipp, who stars as Danielle “Dani” Raymond, an ambitious drummer with the goal of becoming the first female section leader at Atlanta A&T.
Cannon, who served as one of the film’s executive producers, makes a cameo appearance.
“I loved the first ‘Drumline’ movie, and all I wanted to do is bring it justice,” said Shipp, who will also portray Aaliyah in the singer’s biopic, Aaliyah: The Princess of R&B, which premieres on Lifetime at 8 p.m. EDT Nov. 15. “(Cannon) passed the baton in a way, but was like you’re going to make this baton what you want it to be.”
In 2002, Drumline grossed more than $56 million at the box office. The original film was based on the life story of music producer Dallas Austin’s experience in a high school band.
Austin initially thought there should’ve been a follow-up movie soon after the original, especially after hearing the strong demand from fans to create a sequel. But he did not want to rush into another one.
“I felt like we should have had it sooner to tell the truth,” Austin said. “People thought we would never make another ‘Drumline.’ But I was not willing to compromise the integrity of what made it.”
Leonard Roberts, who played Devon’s nemesis in the original, returns as the character of Sean Taylor. But this time, his character has more of a charismatic persona — which initially worried him.
“It was great to finally get a story,” he said. “Sean was kind of the bad guy in the original. I had a momentary pause at first, wondering if the audience would accept him into this role. So it was a transition for me.”
Wendy Finerman, who returned as an executive producer, said the return of Cannon and Roberts will help carry on the legacy of the film.
“We were able to find a fresh way to have the legacy of ‘Drumline’ continue, meaning have a young girl as the drummer and watch where Devin went in his career,” said Finerman, who shared the Best Picture Oscar for the 1994 film, Forrest Gump.
VH1, which aired CrazySexyCool: The TLC Story last year, took an interest in the film because of the “authentic” story it tells.
“Our focus is on stories that have twist and turns, telling a story we’ve never heard of before,” said Susan Levison, head of programming at VH1. “Involving music is important to our brand. We feel ‘Drumline’ can help that cause.”