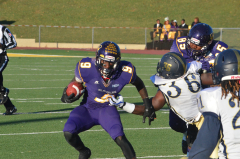 FAIRFIELD, AL – The Golden Bears used a timely interception in the end zone to hold on and defeat Stillman College, 26-22, Saturday evening at Albert J. Sloan-Alumni Stadium in front of 5,201 fans.

The win now creates a winner take all western division championship between the Golden Bears and Tuskegee University for the right to advance to the 2014 SIAC Football Championship being held on November 15th at the Cramton Bowl in Montgomery, Alabama.

Stillman took the opening drive for the score as SC quarterback, Josh Straughan, ran a naked bootleg for the touchdown from five yards out capping a six-play, 69 yard drive that took only 3:12 off the clock.

Miles College responded on the next possession driving the ball 82-yards on only five plays taking only 2:38 off the clock as senior running back, Xavier Bacon, rumbled into the endzone from 27 yards tying the game at 7-7.

Miles College took the lead in the second quarter as defensive tackle converted into running for the game, Alexander Morrison, plowed is way into the endzone from one yard out giving MC the 13-7 lead as Jason Coste’s point after attempt was blocked.

Stillman responded with a second quarter score of their own when Dondre Purnell playing quarterback rather than his usual wide receiver position scored on a two yard TD run giving Stillman the 14-13 lead and halftime edge.

MC held the edge in total yards at that half 226-170. The Golden Bears were led Jonathan Clark who had 114 first half rushing yards.

Clark continued where he left off as he finished off an eight-play 89-yard drive with a 23 yard touchdown run down the middle of the Tigers defense giving Miles the 19-14 lead. Morrison’s two-point conversion attempt failed as he was stopped aat the one yard line.

Stillman regained the lead to start the fourth quarter as Straughan found Devon Mackey in the middle of the endzone, and added to the lead as Straughan caught a two-point conversion from Reese Sturgis making the score 22-19.

The see-saw battle continued as the Golden Bears took the lead once again as Demetric Price connected with DJ Fife in the corner of the endzone on a 29-yard strike giving Miles the 26-22 lead.

Lee salvaged the victory as he intercepted Straughan in the endzone with only :38 remaining to end the game.

Miles College outgained Stillman in total yards 471-379 while 375 came on the ground.

Offensively Clark had his second 200 plus yard game of the season as he finished with 208 yards on 25 carries and a touchdown. Bacon chipped in with 89 yards rushing on 14 carries and a score.

Defensively the Golden Bears were led by Braysean Jones as finished with a game-high 15 tackles (7 solo), 1.5 sacks and 6.0 tackles for loss. Michael Mitchell ended the night with nine tackles, one for loss while Lee finished with two solo tackles, one interception and two pass breakups.

Miles College will host the Golden Tigers of Tuskegee University next weekend November 8th at 4 p.m. CT for the Western Division Championship and a chance to play in the 2014 SIAC Football Championship at the Cramton Bowl in Montgomery, Ala.