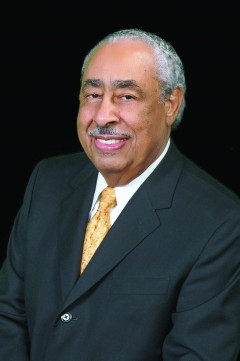 by Jesse J. Lewis, Sr
I have written over 5000 articles during my lifetime.  This is one article that I enjoyed every word that I penned.  It is a privilege and pleasure to write any article regarding a true friend – Reverend Dr. Erskine Faush, Sr.  Everything that I mention in this article down through the years is factual including many other contributions that I did not mention because of space availability.
We have had many correspondences during this period of time between the two of us. Faush’s correspondence is such that I usually had to get a dictionary to understand it. Most people that correspond with Rev. Faush will attest to the fact that they also need a dictionary.  He is just that smart.
The taping of My Father Prayed, the prayers of Erskine Faush, Sr., brings together inspiration and music in an one hour production at 5 p.m., Sunday, December 7,  at More Than Conquerors Faith Church, Birmingham, Alabama.
Known as the man with the “sweetest voice this side of heaven,” Reverend Dr. Erskine Faush, Sr. has been delivering the love of God to Birmingham audiences for the last 64 consecutive years. Considered a legend in the business, he combines his preaching talents with his flair for broadcast every Tuesday through Friday during his program Gospel Cavalcade on 900 Gold WATV.
Faush began his radio career in 1950 when he was recruited to work as a part-time announcer. Already serving as a minister, Reverend Faush welcomed the opportunity as another way to share his ministry. Most notably, his program gave hope and inspiration to thousands of African Americans during the Civil Rights Movement. He and his broadcasting partner, Shelley Stewart, have been described as “cornerstones of Black radio.” Their contributions in the movement have been cited by prestigious organizations and leaders including the President of the United States, the National Association of Black Broadcasters and the Smithsonian Institute.
Faush and Stewart went on to partner as radio station owners and operated Birmingham Ebony Broadcasting—“the authentic voice for African Americans in Birmingham”. Post the sale of WATV, Faush continues daily to be a voice to the voiceless and pastor to the sick over the airways with the legendary “sick call”. Long time friend and Founder of the American Gospel Quartet Convention George W. Stewart says of Faush, “He paved the way for all of us in the ministry and media”. Prayers that have touched generations throughout the years follow his opening theme song, “For The Love of God”. Pastor Steve Green of More Than Conquerors said, “The City remembers him as feeding the hungry and housing those in need by rallying the community.”
Reverend Faush continues his love of ministry as Pastor Emeritus of the Metropolitan A. M. E. Zion Church in Birmingham and has served as Presiding Elder of the Birmingham District, North Alabama Conference. He has served as director of ministerial training for the North Alabama Conference, as a delegate to the World Methodist Conference, and as chairman of the Episcopal Committee of the General Conference. He is Chairman of Faush-Metropolitan Manor, a housing development serving the elderly in the Woodlawn community for the past 30 years.
The Alabama Broadcaster Hall of Famer has a Bachelor of Arts Degree-Faith College in Birmingham, Master of Science Degree-Alabama State University with Broadcast Communication Studies-University of Denver, Urban Studies and Community Planning Graduate Studies-Alabama A&M University, Interdenominational Theological Seminary, Master of Divinity Degree-Union Seminary and Doctor of Divinity Degree-Livingstone College in Salisbury, North Carolina. His affiliations have been at the City, State and national levels.
This is the second installment of prayers chronicled according to Reverend Dr. Erskine “Chuck” Faush, Jr. “It is a gift of love for my father because he has touched so many and I believe it’s really special to him that I along with two of his granddaughters contributed to this legacy production that will outlive us all.
The public is invited to the production of My Father Prayed. A limited number of audience passes are available at WATV Radio, 3025 Ensley Avenue, Birmingham, Al 35208. It is considered a reunion of the best gospel voices from around the City who will sing some of the favorite hymns of the church along with the most inspiring prayers of the past five decades.