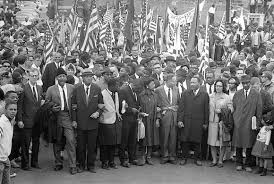 Before President Obama and a cast of political leaders and celebrities arrive in Selma to commemorate the 50th anniversary of the famous confrontation on the Edmund Pettus Bridge, Selma’s religious community is planning a commemoration of its own.
On March 1 at 2 p. m., members of the city’s churches will gather on the southern side of the now-famous bridge for a “Unity Walk.” Rather than march away from Selma toward Montgomery, as marchers did 50 years ago, they will march back into town together, embodying the theme of their event One Selma: Coming Home United in Faith.
In anticipation for the walk, participants have created a Selma Unity Quilt to carry as a banner. Churches, businesses, and individuals contributed a total of 176 quilt squares that were sewn together into a quilt to symbolize healing and unity.
“In a way, Selma belongs to the world,” says Juanda Maxwell, a lay leader at Brown Chapel African Methodist Episcopal Church. “But those of us who live here understand that there is a new reality, that we are building the multiracial society that the people who were beaten on Bloody Sunday and the people who marched to Montgomery fought for.”
“Walking back across the bridge is a way to symbolize that God is working to unify Selma,” says the Rev. Jerry Light, Pastor at First Baptist Church. “We are making a witness to the fact that the community is hungry to work together for a positive future. “

“While the walk doesn’t take away the horrible image of Bloody Sunday, it gives Selma and the world a new narrative to live by – a narrative of renewal and resurrection where God is bringing all people and races together to serve a common purpose in faith and love, says the Rev. Jack Alvey, Rector of St. Paul’s Episcopal Church.