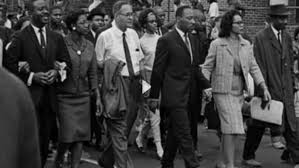 DNBE REMINDS US THAT “SELMA IS NOW”

— Commemorating the 50th Anniversary of the Selma to Montgomery March —

Atlanta, GA ­(BlackNews.com) — As another Black History Month comes to an end and America prepares to celebrate the 50th anniversary of Bloody Sunday, a pivotal moment in the Civil Rights Movement, DNBE Apparel reminds us that there is still much work to be done with the release of their latest shirt Selma Now. The racism and discrimination faced by people of color today is not as easy to spot as it was back then, but it persists nevertheless. In the powerful words of Grammy and Oscar Award­-winning artist Common, We look to the future and we want to create a better world. Now is our time to change the world. Selma is now!”

DNBE, a company that produces statement­-making t­-shirts that they refer to as #PositivePropaganda, is using their latest creation to raise funds and awareness for human rights and justice issues that plague us today. A portion of the proceeds from the sale of Selma Now will go to support Dream Defenders, an organization developing the next generation of radical leaders to realize and exercise our independent collective power; building alternative systems and organizing to disrupt the structures that oppress our communities. Dream Defenders was founded in the aftermath of the murder of Trayvon Martin and is bringing organization and strategy to a movement plagued by reactionary protests with little sense of direction or clear goals.

The Civil Rights Movement was effective because its leaders had specific, achievable demands and a plan for success. While they capitalized on the media value of tragic events, they were not just reacting to them. They used them in a larger strategy to build awareness and create political pressure for legislative reforms.

DNBE stands for Dangerous Negro Black Empowerment. “With a name like that we get the side­-eye from a lot of people, black and white, until people actually see our shirts and we explain where we got the idea for the name,” says Demetrius Walker, DNBEs marketing director. The name was inspired by the fact that civil rights leaders like A. Philip Randolph and Dr. Martin Luther King, Jr., were called dangerous Negroes by certain government authorities of their time. DNBE best sellers include Smart is the New Gangsta, Rebel, and Black Truth. Their name may be controversial, but who could argue with these positive statements that are meant to inspire and uplift?

About DNBE
DNBE Apparel was founded in February 2006 by seven college students with the mission to promote positive messages, knowledge, and intellectual curiosity to the youth through fashion, entertainment, and media in order to help combat the negative messages that they are bombarded with every day