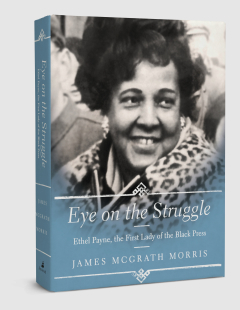 Ethel Payne, The First Lady of the Black Press: A Life Worth Remembering Today
by James McGrath Morris

The movie “Selma” has reawakened interest in the struggle for civil rights among younger generations of Americans particularly in the role of the less well-known foot soldiers of the movement. One of the more remarkable figures of that era that has almost disappeared from the pages of history is journalist Ethel Payne. Her life is certainly worth remembering today, especially in light of the news media’s recent role in reporting on the death of African Americans at the hands of the police.
The granddaughter of slaves and the daughter of a Pullman porter, Ethel Payne rose to become the nation’s preeminent Black female reporter of the civil rights era, chronicling the movement’s seminal moments in the Chicago Defender for a national Black readership hungry for stories that could not be found in the white media. From publicly challenging President Eisenhower’s commitment to desegregation in the 1950s to capturing the lives of Black troops in Vietnam in the 1960s, she became known simply as “the First Lady of Black Press.”
Her unflinching yet personable reporting enlightened and activated Black readers across the country and made her a trusted ally of civil rights leaders. When she worked in the ranks of the virtually all-white Washington press corps, she gave Black America a voice and presence at the highest reaches of power that could not be ignored.
What Payne discovered when she first arrived in Washington in 1953, as one of only three African American White House correspondents, was that merely asking civil rights questions of the president at national press conferences forced the white media to report on the issue and place it on the national agenda. From Dwight D. Eisenhower to Ronald Reagan, occupants of the White House all knew the First Lady of the Black Press.
On display in her apartment were pens given to her by President Lyndon B. Johnson that he used to sign the 1964 Civil Rights Act and the 1965 Voting Rights Act. Aside from Martin Luther King, she was one of the very few people who were not lawmakers to have been given pens by the President from the signing of the two most important legislative victories of the civil rights movement.
But Payne did not limit herself to merely confronting those in power in Washington. She expanded her reporting to the Southern desegregation battlegrounds in the 1950s. Her stories from the South and her continued nudging presence in the Washington press corps made her one of the civil rights movement’s most trusted sources of news for African Americans. As the movement gained traction, Payne went overseas traveling and reporting from Africa and Asia in the belief that international affairs and civil rights were inextricably linked.
As her career wound down in the 1970s Payne became the first African-American woman radio and television commentator on a national network when CBS hired her. But in the 1980s, Payne began to withdraw from public life retiring from active journalism, writing the occasional column, teaching, and protesting; she was arrested in front of the South African embassy in 1985 during an anti-apartheid protest.
She harbored no regrets, including not having been able to pursue her childhood hope of being a lawyer, except for one. “I was married to my work,” she said. “But I would have liked to have been married, yes, and have children of my own.”
Payne died alone in her Washington apartment in 1991. “Her voice was low, but her questions were piercing, and her reports on the world were cherished by millions of readers,” the Washington Post noted in an editorial. “Had she not been Black she certainly would have been one of the most recognized journalists in American society.”
Ethel Lois Payne’s story offers a gentle reminder that the great power of a free press rests on a simple notion of rendering those in power accountable. Payne’s journalism invoked none of the angry name-calling fashionable in the news media today. Rather, she brought only one weapon with her when she gained access to the halls of power on behalf of her readers. It was to ask questions that others were not asking.
And she got answers.