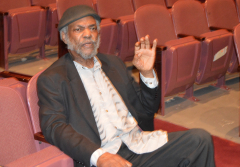 by Hollis Wormsby, Jr.
I had the privilege of interviewing jazz legend, Cleve Eaton as the first interview for my new portrait series. Cleve Eaton is an international jazz legend. For 17 years he served as the personal bassist for Hall of Fame  jazz legend, Count Basie, who said of Cleve, “He is my personal bassist, and one of  the best of all times.”
Before he performed with Count Basie, he enjoyed 10 years as the bassist for the Ramsey Lewis Trio. His time with Ramsey began in 1965. It was at this point in the interview that I began to realize that in addition to being an incredible musician, Cleve was also an incredible storyteller and the best I could do would be to help him tell his story.
According to Cleve his relationship with the bass began when he saw a bass case in the car of John Springer, a music instructor at Fairfield Industrial High. He said that at first he didn’t know what he thought was in the case, for all he knew it could be a body. But that when Springer showed him it was a bass, and played it for him, that was when his love of the bass as an instrument began. Cleve would go on to note that of all the instructors he encountered as he rose through the ranks of the top bass players in the world, no one taught him more than John Springer, who passed away recently. He also noted that this moment was one of the moments that taught him that God was in control in his life, because Stringer told him he never left his bass in his car, but because he did that day, a jazz legend was born.
His relationship with Ramsey Lewis was what initially propelled Cleve into national recognition, but Cleve noted it was a relationship that almost didn’t happen. According to Cleve when Ramsey initially called him to become his bassist, he was embroiled in controversy with his then band members over compensation. Because of this, for months after Ramsey made his initial offer to Cleve he could not perform because of the lawsuits he was involved in with the band members he had dismissed. Cleve then sued Ramsey for $50,000 for wages lost after Ramsey made the offer to him and then did not have any shows.  Eventually Cleve won a $12,000 settlement and figured his relationship with Ramsey was over, but unexpectedly Ramsey’s people called again and said they still wanted Cleve. This was in 1965, and Cleve insisted he would only accept for $900 per week, given Ramsey’s past payment issues. At the time $900 a week was a lot of money, and more than the norm. Ultimately, Ramsey relinquished and Cleve began a 10 year stint with Ramsey, that included multiple gold records and the Grammy for Sun Goddess.
During Cleve’s early years with Ramsey the drummer was a young phenomenon named Maurice White who was making $350 a week.  When Ramsey refused to raise his pay by $50 a week, White left and began forming Earth Wind and Fire, and we all know how that worked out. Ultimately the same scenario played out with Cleve, when he left the Ramsey Lewis Trio after 10 years because Ramsey never gave him a raise either.
At that point Cleve says he didn’t know what he would do, but that he trusted in God to lead him in the right way. That way would come in the form of an offer to serve as a two week fill in for the Count Basie Band. Two weeks would turn into 17 years and Count Basie declaring Cleve as his personal bass player.
The Cleve Eaton story is also a love story between he and his wife of 38 years, Myra Eaton. Myra says that she first met Cleve at Joe Namath’s club in Birmingham. Oddly enough on the night she was there the Ramsey Lewis Trio, including Cleve, was playing and that is where they first hooked up. She says of her time with Cleve, “That because of Cleve I have been all over the world and all over this country. I have met incredible people. I have had an incredible life.”
When you ask Cleve what Myra means to him, he says simply, “ I have had cancer twice and am going through rehab now. Through all I have been through she has been there for me. I think that is what love is.”
On February 26, the Brothers of Alpha Phi Alpha, Omicron Lambda Chapter, in association with the Real Life Poets will present an evening of jazz, poetry and singing, in tribute to Cleve Eaton’s lifetime contribution to the arts here in Birmingham, Alabama. The event will take place at the Alpha House on First Avenue North. Doors open at 6 p.m., show begins promptly at 7 p.m.  The highlight of a multitalented evening will be a performance by Cleve Eaton and the Alabama Jazz All Stars; also featuring poets, Pricilla Hancock Cooper, Washington Booker and John Paul Taylor and the Real Life Poets. Did I mention vocals by Rickey Powell and Logan?
But when you ask Cleve what he is really excited about for the evening he will tell you it is the chance to play with his grandson, Kameron Dickerson, who is studying music and playing saxophone, at the University of Alabama. Cleve says of the way he feels watching Kameron develop, “It is so exciting to me to see him develop. I bought him a computer last year to help with his music, because I wanted him to have the tools. Then recently I heard him playing at a program at Alabama, and I thought, I have to get him a tenor saxophone, because he just really has a sound. And that is one of those things that either you do or you don’t and he does.” Kameron will perform a duet with Cleve during the upcoming tribute.