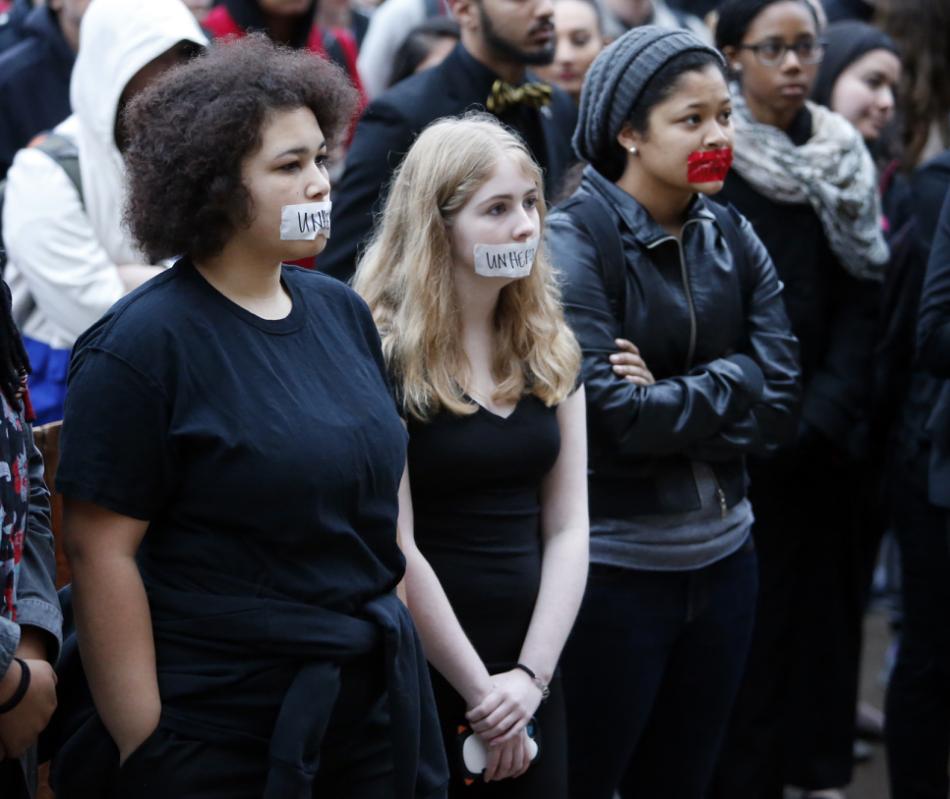 photo: Students at the University of Oklahoma protest racist comments made by a fraternity on Monday, March 9, 2015 in Norman, Okla. University President David Boren lambasted members of Sigma Alpha Epsilon fraternity on Monday who participated in a racist chant caught on video, calling them disgraceful and their behavior reprehensible, and ordered that their house be vacated by midnight Tuesday. (AP Photo/The Oklahoman, Steve Sisney)

NORMAN, Okla. (Reuters)  – The University of Oklahoma closed a fraternity linked to a video of students singing racial epithets, ordered its members to move out of the house and labeled the actions of those involved “disgraceful.”
“Effective immediately, all ties and affiliations between the university and the local SAE (Sigma Alpha Epsilon) chapter are hereby severed,” University President David Boren said on Monday.
Members had until midnight on Tuesday to vacate the premises. People could be seen loading goods into moving trucks behind the fraternity house on Monday.
The incident comes at a time of heightened racial tensions following U.S. incidents of unarmed African-Americans being fatally shot by police. Over the weekend, ceremonies in Selma, Alabama, marked the 50th anniversary of a crackdown on a civil rights march there known as “Bloody Sunday.”
In the 10-second video posted online on Sunday and replayed by media outlets, students on a bus chanted in unison, using offensive language referring to Blacks and vowing to never admit them into the fraternity.
It was not immediately clear when the video of students on a bus chartered for a date night was taped.
“To those who have misused their free speech in such a reprehensible way, I have a message for you. You are disgraceful,” Boren said.
He told a news conference the fraternity would not be allowed back on campus as long as he is president and the university has launched an investigation to see if individual members can be punished. No students were named.
Boren walked alongside hundreds of students at a solidarity rally on campus on Monday morning, hours after the Sigma Alpha Epsilon’s national leadership suspended its members at the university over the video.
The fraternity in Oklahoma was hit by graffiti, with one message calling for it to be torn down.
“We apologize for the unacceptable and racist behavior of the individuals in the video, and we are disgusted that any member would act in such a way,” Sigma Alpha Epsilon’s national headquarters said after verifying its OU members were involved.
The fraternity, one of the country’s largest, has been linked to at least six deaths in the past eight years from excessive drinking or hazing violence. SAE has denied any wrongdoing.
SAE chapters have been punished before over racially charged incidents at other campuses. It did not respond to a request to comment.
Douglas Fierberg, an attorney specializing in school hazing, said a major problem is that SAE relies heavily on self-management by undergraduates on campuses.
“You can have a ‘Lord of the Flies’ circumstance in that these young men are essentially on their own island managing themselves and doing a god-awful job of it,” he said. “It does have deadly results.”
The Oklahoman website reported that a top high school football recruit, Jean Delance, announced he had withdrawn from the university on Monday “due to personal reasons,” after the scandal broke.
(Additional reporting by Chris Michaud in New York; Writing by Jon Herskovitz; Editing by Alan Raybould, Doina Chiacu and Matthew Lewis)