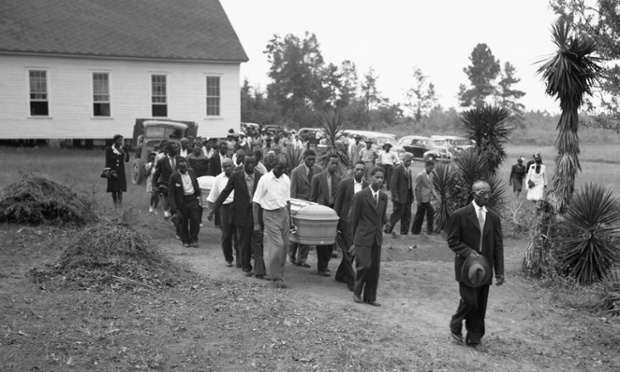 The US justice department will be accused in front of the United Nations on Thursday of failing to account for hundreds of African Americans who disappeared or were murdered by groups such as the Ku Klux Klan during the civil rights era.

The UN’s human rights council in Geneva will be told at a special meeting of its working group that the wave of racial violence that swept through the deep south in the 1940s, 50s and 60s has never been accounted for, despite a congressional law passed seven years ago that instructed the FBI to look again at the issue. The message will be delivered to the UN by a team of lawyers and civil rights experts from Syracuse University who have investigated scores of cold cases of race murders that have never been brought to justice.

They will tell the UN – as part of the world body’s review of the human rights record of the US that reaches a climax in May – that they have compiled a list of more than 300 suspicious killings that the FBI have not even recognized, let alone cleared up. By that calculation there have been hundreds, possibly thousands, of individual murderers who have killed in the name of white supremacy and enjoyed total impunity.

A small but unknown number of them are still alive and at large.

“The United States has never come to terms with accountability for the devastating loss of life during a time of domestic terrorism that continued in many forms after the legal end to slavery,” the Syracuse team, led by professors Paula Johnson and Janis McDonald of the Cold Case Justice Initiative, will tell the UN.

The UN spotlight falls at a time of rising concern about the unresolved nature of America’s sordid history of race killings. It follows the recent publication of a study by the Equal Justice Initiative that identified almost 4,000 lynchings in the country between 1877 and 1950 – vastly more than previously reported.

The issue has also been heightened by growing public concern about contemporary police shootings of unarmed black people such as Michael Brown in Ferguson, Missouri, and Eric Garner in New York. The Syracuse experts will invite the UN to draw a parallel between the recent spate of police shootings and killings in the civil rights era, many of which occurred with the active co-operation or silence of local law enforcement agencies.

In 2008 Congress passed the Emmett Till Unsolved Civil Rights Crime Act – an attempt to kick-start the investigation of murders committed during the civil rights era. The legislation was named after the 14-year-old black boy who was tortured and drowned in 1955 after he was accused of whistling at a white woman. His murder shocked the nation and nobody has ever been convicted, even after the case was reopened in 2004.

The FBI has put together a list of 126 victims of suspected racial murders that occurred before 1970 in which no perpetrator has ever been prosecuted. In his report to Congress last year about the DoJ’s performance under the Emmett Till Act, the attorney general, Eric Holder, said the department had invested considerable resources into investigating these cases, including the involvement of more than 70 federal prosecutors.

The DoJ had “helped to bring closure to many family members of the victims”, he said.

But the cold case lawyers will tell the UN that there have been several basic failings in the way the DoJ has gone about meeting its obligations under the act. They will argue that the total of 126 victims identified by the FBI is a huge understatement of the scale of racial killings in the 1940s, 50s and 60s, pointing out that the list of names has barely changed since the new law was introduced.

“Only a handful of names have been added to the partial list that existed when the law was passed,” the Cold Case Justice Initiative states in its official submission to the human rights panel.

The DoJ has closed all but 11 of the cases involving the 126 victims. According to the Syracuse team, the FBI has deemed many investigations to be at an end, even before agents have interviewed all new potential witnesses or talked to all the victims’ family members.

Since the act was introduced there has been only one successful prosecution. In 2010 a former Alabama state trooper, James Bonard Fowler, pleaded guilty to the 1965 shooting of civil rights protester Jimmie Lee Jackson and received a six-month prison sentence.

Shortly before the act was put into effect James Ford Seale was prosecuted for the 1964 murders of two teenagers, Charles Moore and Henry Dee, in Mississippi. Seale was sentenced in 2007 to three life terms and died in prison four years later.

Stanley Nelson, a reporter with the Concordia Sentinel in Louisiana, has spent more than seven years investigating racial violence in Concordia parish and across the state lines in Natchez, Mississippi. This area of the deep south was the epicenter of the violent white backlash in the civil rights era and was the home of the Silver Dollar Group, a vicious offshoot of the Ku Klux Klan.

Nelson said he had been “personally frustrated by the way in which the DoJ and the FBI have handled the new look into these cold crimes”. Instead of setting up specialist teams of detectives and prosecutors that could focus their energies exclusively on trying to clear up unsolved murders, they left the investigations to regional FBI offices already busy with current criminal cases. As a result the attention given was patchy at best.

Nelson said it was a battle against the clock, as witnesses and suspects were steadily dying. “When I wrote about my first cold case in 2007 I started to keep an obituary file of individuals who had died – now it’s an inch thick,” he said.

He said that he sympathized with the difficulties faced by the FBI in tackling cases where witnesses had refused to speak for decades for fear of retribution, and where physical evidence was often non-existent. But he added: “We still have to find out everything we can, so that we can understand what happened in an era that is rapidly dwindling.”

As part of its case to the UN, the Cold Case Justice Initiative will call for the Emmett Till Act to be extended beyond 2017, when its term is due to run out, and for its remit to be extended to include modern police shootings of black teenagers. “There are potentially thousands of suspicious race killings at the hands of local police yet the federal and local governments refuse to investigate many of these deaths,” its submission says.

Holder said in his report to Congress that there were “certain difficulties inherent in all cold cases: subjects die; witnesses die or can no longer be located; memories become clouded; evidence is destroyed or cannot be located; original investigations lacked the technical and scientific advances relied upon today. Even with our best efforts investigations into historic cases are exceptionally difficult, and justice in few of these cases will ever be reached inside of a courtroom.”