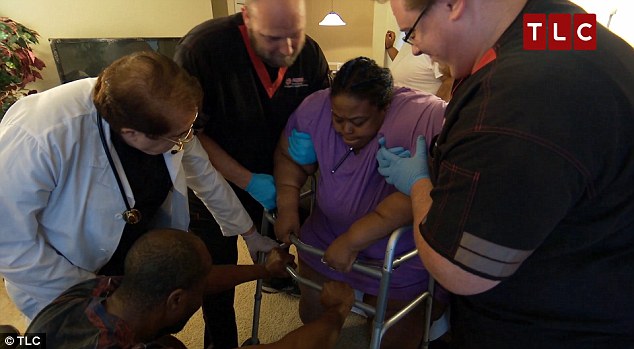 It might be hard to imagine someone putting on hundreds of pounds from eating all kinds of comfort foods, but this is reality for Marla McCants, who weighs in at 800 lbs from doing just that.
Stress eating became her way of dealing with the trauma following being kidnapped by her former boyfriend. Now, after years of doing nothing but eating and sitting still, she stood up for the first time and it was captured on Wednesday’s TLC program, “My 600-lb Life.”
McCants, who says she never had a weight problem in the past, used eating as a means to cope with being kidnapped at gunpoint by her boyfriend after she tried to call it quits. The traumatic experience left her afraid to leave the house for fear that her boyfriend would locate and kill her.
By the time he was captured, she weighed 700 pounds.
McCants, 43, moved from Nashville to Texas with her daughter, Sierra, so she could work with Dr. Younan Nowzaradan, who specializes in weight loss. But the trip alone nearly killed her. It had been so long since she used her legs, a blood clot had formed and worked its way to her lung.
Upon her arrival to the doctor’s office, he described her as being “…in the worst condition health wise that I have ever seen,” and he revealed that her condition showed she was only weeks or months from death.
Unable to do anything for herself, McCants is totally dependent on her daughters.
To help manage her weight, she was placed on a 1,000-calories-a-day diet and had gastric bypass surgery. Even with all of this, she still made excuses when her family and doctors pleaded with her to try to stand up. She said it was too painful and would scream whenever the attempt was made.
Frustrated and feeling helpless, the doctors discharged her from the hospital because of her lack of cooperation. “Marla has convinced herself that she cannot walk, but the reality is that she doesn’t want to walk,” Dr. Nowzaradan said.
“If Marla won’t get up, we can’t treat her,” he continued. “This is a life or death situation. She is going to die.”
McCants moved back in with her daughter and insisted she could do it on her own, but to no avail.
After an exasperating eight weeks, Sierra called Dr. Nowzaradan again and McCants finally acquiesced and stood on a scale for the first time in years.
Shocked by what she saw, a 266 lb. weight loss, McCants claims she is now motivated to continue.
“Getting up and standing was one of the most encouraging things I’ve done and now I don’t want to stop,” McCants said, noting that she was “proud” of herself.