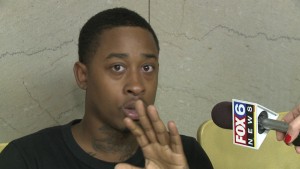 He may not look like an idiot, but a Milwaukee man sure acted like one. I mean, how else would you describe someone who told a news reporter the reason why he couldn’t pay the $100-a-month child support ordered by the court is because he had “died in a car accident.”
People go to unbelievable extremes to get out of paying their bills. But rarely do you hear about a parent, a person who is at least half responsible for bringing another human being into the world, going to such lengths to avoid taking care of that child.
Well you haven’t met John McCroy, a father who faked his own death to get out of paying child support.
Known by his rap name, “Jakitdown,” McCroy was busted and sentenced to 60 days in jail once authorities determined that he’d avoided paying support for his daughter. He also faces three years probation from a felony charge of failure to pay child support.
Although the man is unemployed and lives at home with his parents, he has managed to cough up $10,000 in outstanding child support.
McCroy has three children by three different women. He allegedly doesn’t pay support for any of them; but only one mother is taking him to court.
FOX6 news originally profiled McCroy because…IDIOT ALERT… he flashed money online that he said he had made from mix-tapes. But it didn’t take long to find out, dude has a site where his mixtapes are “sold” for free.
Then, when he was interviewed by the news station (in that photo above), he told the reporter that he IDIOT ALERT #2…couldn’t pay child support because he’d died in a car accident.
McCroy had been ordered to pay $100 dollars a month for his 5-year-old daughter. He made one payment when the little girl was born and only because he had to be up-to-date on child support payments to purchase the car he wanted.  But then he never paid again. Watch the youtube video below.