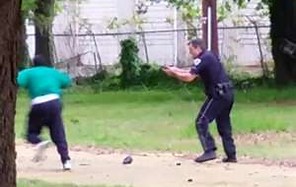 NAACP Statement on the Fatal Shooting of Walter Scott

BALTIMORE, Md. – A white South Carolina police officer who claimed he killed Walter Scott, a 50-year-old unarmed African American man, in self-defense was charged with murder after a bystander’s video recorded him firing eight shots at the man’s back as he ran away.

From Cornell William Brooks, NAACP President & CEO:
“Our prayers go out to the friends and family of Walter Scott. The death of yet another African-American man at the hands of those sworn to protect and serve the community is a grim reminder of the urgent need for criminal justice reform. Scott was a father of four and a veteran of the U.S. Coast Guard whose life was senselessly cut short due to a tragic encounter with the police. While we commend the U.S. Attorney’s office, the FBI, the South Carolina Law Enforcement Division and other law enforcement personnel who assisted in the swift arrest of Officer Michael T. Slager, we must also applaud the courageous citizen of North Charleston who captured the shooting incident on video then swiftly released it to the public. From Michael Brown and Eric Garner to Tony Robinson and Tamir Rice, the narrative of excessive force and police brutality continues to permeate headlines and command our collective attention.
The NAACP South Carolina State Conference will work tirelessly with federal and local authorities as well as North Charleston residents to ensure that a full and thorough investigation takes place and that justice is served. We will also push for a police department that reflects the diversity of the community. African Americans constitute 47 percent of the North Charleston population, yet constitute only 20 percent of the police force. We must continue to advocate for solutions within our criminal justice system that will keep our communities safe, our children protected and our officers properly trained and engaged.”