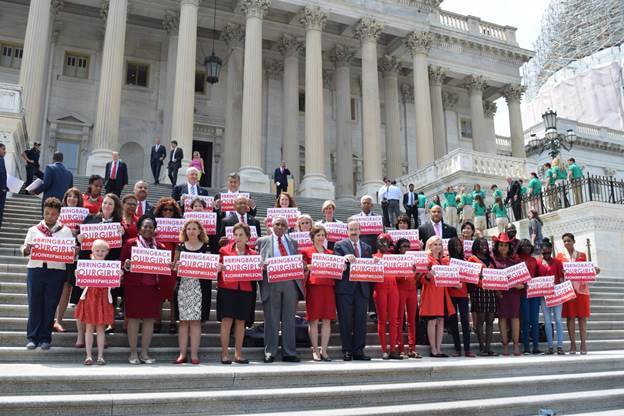 The Florida lawmaker also calls for efforts to prevent the recruitment of young Americans.

If it’s Wednesday, the color of the day in the U.S. House of Representatives is red.
Led by Congresswoman Frederica S. Wilson (FL-24), dozens of lawmakers each week participate in Wear Something Red Wednesday to #BringBackOurGirls to commemorate the nearly 300 Nigerian schoolgirls Boko Haram abducted last April from their dormitory rooms. They are also sending a message to Nigeria’s leaders: They’re watching and expect every effort will be made to end the terrorist group’s reign.
On June 10, six girls who miraculously found the courage to escape their captors joined the lawmakers on the steps of the U.S Capitol.
“The terrorist organization snatched these girls from the safety of their school, determined to rob them of an education,” Rep. Wilson said. “They are bravely and proudly defying Boko Haram by getting the education they deserve.”
Wear Something Red Wednesday is just one component of a yearlong effort by Rep. Wilson to secure the safe return of the girls who are still missing, and most important, to defeat Boko Haram. She has been spearheading a campaign during which political leaders, human rights activists and ordinary people from around the world have for the past year tweeted their condemnation of the group and its members’ acts of atrocity and support for their countless victims throughout the day, each and every day.
“Frederica Wilson has been a force beyond nature in her enthusiasm and commitment to bring these girls to safety,” said Democratic Leader Nancy Pelosi (CA-12).
Lawmakers on both sides of the aisle have given their support to House Resolution 147, a measure introduced by Rep. Wilson that directs the U.S. and Nigeria’s government to degrade and ultimately destroy Boko Haram. She has, said Rep. Chris Smith (R-NJ), chairman of the House Foreign Affairs Committee’s Subcommittee on Africa, Global Health, Global Human Rights and International Organizations, “maintained her efforts to free the Chibok girls and all the others kidnapped by Boko Haram, while others have moved on to different issues.”
Speaking to reporters Wednesday, Rep. Wilson also warned of the potential threat to the United States posed by both Boko Haram and ISIS, which have formed an unholy and treacherous alliance
In the past few months, disheartened young people from around the country have put their futures on the line to sign up for terrorist training. With little to keep them occupied during the summer months and the feeling by many in the nation’s urban centers that their lives don’t matter, the Florida lawmaker warns that young men of color in particular could be vulnerable to recruitment efforts.
“We have no jobs for boys in the African-American community, so they’re easy prey if Boko Haram begins to infiltrate our urban communities and speaks to them about how they’re being treated in this country. That’s very dangerous,” she said. “I hope everyone understands that this is not just about bringing back our girls; it’s also about protecting our homeland.”

Congresswoman Frederica S. Wilson is a third–term Congresswoman from Florida representing parts of Northern Miami-Dade and Southeast Broward counties. A former state legislator and school principal, she is the founder of the 5000 Role Models for Excellence Project, a mentoring program for young males at risk of dropping out of school. Congresswoman Wilson also founded the Florida Ports Caucus, a bipartisan taskforce that coordinates federal action in support of Florida’s harbors and waterways.