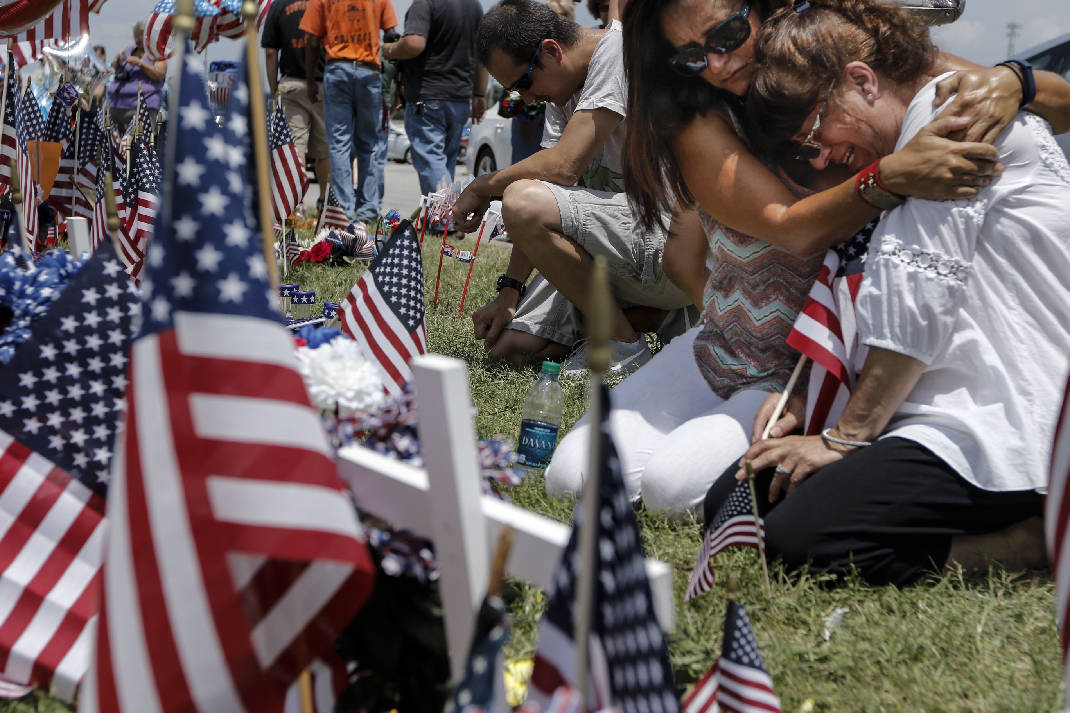 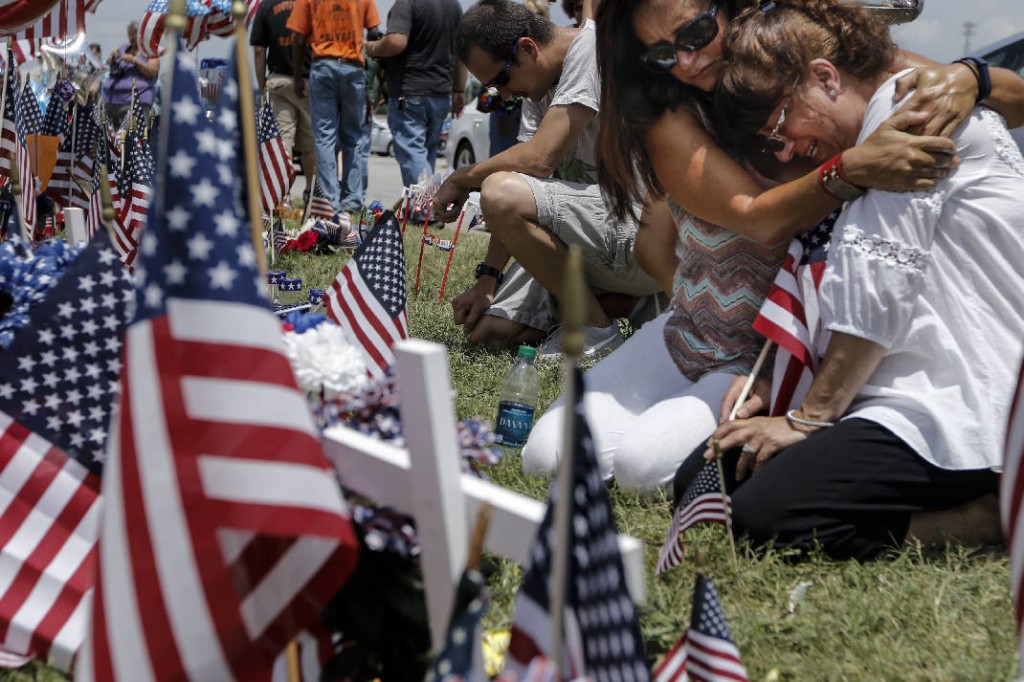 Deborah Wyatt Boen, right, mother of U.S. Marine Corps Staff Sgt. David Wyatt, and Deanna Wyatt Trent, his sister, mourn at a Lee Highway memorial for Staff Sgt. Wyatt and other victims of the July, 16 shootings on Saturday, July 18, 2015, in Chattanooga, Tenn. U.S. Navy Petty Officer Randall Smith died Saturday from wounds sustained when gunman Mohammad Youssef Abdulazeez shot and killed four U.S. Marines and wounded two others and a Chattanooga police officer at the Naval Operational Support Center on Amnicola Highway shortly after firing into the Armed Forces Career Center on Lee Highway.
Photo by Doug Strickland /Times Free Press.
Depression Dogged Chattanooga Gunman
CHATTANOOGA, Tenn. (AP) – The Kuwait-born man who killed five service members was first treated by a child psychiatrist for depression when he was 12 or 13 years old, fought drug and alcohol abuse in later years and went to Jordan last year to clean up, a person close to the family said.
Relatives of Muhammad Youssef Abdulazeez, 24, believe those personal struggles are at the heart of last week’s killings at a pair of military sites in Chattanooga, the person said Sunday on the condition of anonymity to avoid unwanted publicity.
“They do not know of anything else to explain it,” said the person, who has been in contact with the family several times since the shootings Thursday.
The family’s explanation fits a pattern of behavior by Abdulazeez that includes a drunken driving arrest earlier this year and the loss of a job over a failed drug test.
Counterterrorism investigators have not released a motive and said they are looking into his overseas travel and whether he was inspired or directed by any terrorist organization. So far, they have not released in any evidence showing he was.
Abdulazeez was killed in a shootout with police at a Marine-Navy facility. On Monday, yellow police tape still blocked access to it and law enforcement vehicles were parked nearby with lights flashing.
About seven miles away, in a small strip shopping center, hundreds of people – many carrying American flags and some with Confederate battle flags – gathered outside the military recruiting office where the rampage began. The windows, several of which were pocked with bullet holes after the shooting, have since been covered with plywood.
Several years ago, relatives tried to have Abdulazeez admitted to an in-patient program for drug and alcohol abuse but a health insurer refused to approve the expense, the person close to the family said.
“He was medicated like many children are. Through high school and college he did a better job sometimes than others staying with it,” the person said.
Abdulazeez had spent several months in Jordan last year under a mutual agreement with his parents to help him get away from drugs, alcohol and a group of friends who relatives considered a bad influence, the person said.
FBI spokesman Jason Pack declined comment on whether investigators were pursuing mental health records. FBI agent Ed Reinhold has told reporters investigators were looking into all aspects of his life.
While Abdulazeez sometimes expressed misgivings about U.S. policy in the Mideast, his feelings didn’t seem extreme and there was no indication he was involved with terrorist groups while in Jordan, the person close the family said. He owned guns for years, going back to when he was a child shooting at squirrels and targets, and called himself an “Arab redneck” or “Muslim redneck.”
A year after graduating from college with an engineering degree, Abdulazeez lost a job at a nuclear power plant in Ohio in May 2013 because of what a federal official described as a failed drug test.
Recently, Abdulazeez had begun working the night shift at a manufacturing plant and was taking medication to help with problems sleeping in the daytime, the person said, and he also had a prescription for muscle relaxants because of a back problem.
It’s unknown what substances were in the man’s system at the time of the killings, but toxicology tests should provide an answer.
After returning from his time overseas, Abdulazeez was arrested on a charge of driving under the influence April 20. A police report said he told a Chattanooga officer he also was with friends who had been smoking marijuana. The report said Abdulazeez, who had white powder on his nose when he was stopped, told the officer he also had sniffed powdered caffeine.
The arrest was “important” because Abdulazeez was deeply embarrassed and seemed to sink further into depression following the episode, the person said. Some close relatives learned of the charge only days before the shooting.
Bassam Issa, president of the Islamic Society of Greater Chattanooga, said he knew nothing of Abdulazeez’s problems, despite knowing his father well through the mosque. Drinking alcohol and using drugs is strictly forbidden in the Islamic faith.
“In our culture, if a son or daughter is having those sorts of problems, they keep it a secret because of the shame,” Issa said. “As a parent, you always want to be able to say your child is making you proud, not that they are struggling.”
A former college professor who saw Abdulazeez at their mosque six days before the killings said the young man didn’t seem different after returning from Jordan last year or during their final encounter.
“I just saw the same friendly guy as before,” said Abdul Ofoli, who teaches electrical engineering at the University of Tennessee at Chattanooga, where Abdulazeez graduated in 2012.