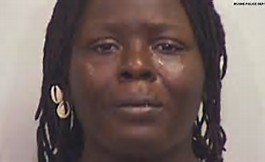 A Texas mother was arrested on Friday after three of her five young children drowned in a community pool.

Patricia Allen, 30, of Irving, was charged with injury to a child stemming from the June 24 tragedy when Anthony Smith, 11, August Smith, 10, and Treshawn Smith, 9, all died after being pulled from the water. A witness said Allen appeared to be texting and using her phone while attending to her two younger children who she also brought to the pool, and that none of the children had any flotation devices, according to the police affidavit.Allen told investigators that neither she nor her kids knew how to swim, the affidavit stated.

“The true facts are that the three children did know how to swim, that Ms. Allen knew how to swim and that she was not on her cell phone…Ms. Allen searched for her children, but could not see them because of the murky water. She yelled for help. When bystanders helped pull the children from the water she began CPR,” Allen’s attorney, Linda Turley, told HLN.