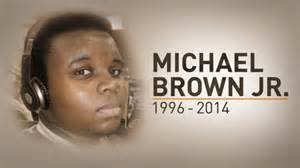 Anticipation for the commemoration of the one-year anniversary of the killing of Mike Brown Jr. by then-Ferguson Police Officer Darren Wilson was high. Clergy community and civil leaders, gathered to remember “Mike-Mike”‘s life, death and aftermath that sparked a movement.
While Mike Brown’s death unfortunately was not wholly unique, the response from the community was. Community members stayed in the street publicly protesting and never went home. Open defiance lasted hundreds of days. Even after the police brought out dogs and tear gas, the community refused to back down. These acts of civil disobedience inspired people around the country to defy the initial storyline of “looters” and “rioters” and to look to the deeper issues at play in Ferguson.
This anniversary was met with protests and renewed calls for justice but it was also greeted by music, concerts, prayer vigils and strategy sessions. While the goals remained steadfast among demonstrators and concerned folks, there was diversity in approach and tactics. Activists, artists and religious leaders were retrospective with a keen eye toward all that still must be won. The future of a movement was in the hands of not just Ferguson but the nation and as a movement, it must be prepared to act locally and nationally.
Yet the response of the police and some politicians in St. Louis County has not maturated. Once again, vehicles and armament reminiscent of war scenes, rolled onto West Florrisant in Ferguson. On the anniversary of Mike Brown’s death while a concert headlined by Talib Kweli and Common rocked the night in Ferguson, the police ordered a group of protesters to disperse. Moments later, they teargassed the very path the police ordered protesters to take. A 12-year-old girl was put in handcuffs. A handicapped veteran was maced and tackled to the ground. Armed white vigilantes roamed the streets of Ferguson while once again black protesters found themselves public enemy #1.
The next day, protesters took to Highway 70 shutting it down for 15 minutes. Those demonstrators who were nearly run over by an angry driver were charged with assault. Demonstrators and onlookers were arrested, many kept in handcuffs for up to 12 hours.
These actions are merely a manifestation of the deeper structural issues that remain in St. Louis County. The entrenched system, never improved by the civil rights movement, continues to fight reform and punish those calling for it. St. Louis County’s municipalities had a banner year in terms of arrests and fines collected from its residents. Ferguson has rejected the first draft of the consent decree presented by the Department of Justice in order to ameliorate its racist policing practices.
In an equally brazen move, the county executive for St. Louis County has decided to pursue criminal charges against protesters. These charges go as far back as last August and our cases that the state prosecutor and the municipalities chose not to pursue.
I think of the ways in which St. Louis County continues to defy conventional wisdom treating its own citizens as enemy combatants every time I hear criticism of the tactics of Black Lives Matter activists. From colleagues to comment sections, there is a constant refrain citing tactics over substance. Critiques of political targets over the terror black communities are facing calls to question our priorities as a nation.
One year out, I the tactics of disruption coupled with strong policy recommendations that quickly evolved into reform is the only way to manifest that black lives matter. The Butcher’s Bill is growing with so many dead black men and women at the hands of law enforcement it is difficult to keep track of the hashtags. If a 12-year-old in handcuffs or in a body bag is not enough to shake the entire country from its complacent slumber, perhaps it is not so extreme that people continue to utilize tactics that bring them face-to-face with military vehicles and disapproval from political parties.
One year out, something must give. Not just in Ferguson, but in the hearts, minds, and actions of Americans everywhere. The truth: many of us simply can’t go home hoping that the protests will abate and things will go back to normal. Many of us are fighting this system like our lives depend on it. Because for some of us, they do.
Nicole Lee is the co-founder of the Black Movement Law Project and the immediate past president of TransAfrica.
This article is seventh of an op-ed series on behalf of the Civil Rights Coalition on Police Reform. The coalition, convened and led by the national Lawyers’ Committee for Civil Rights Under Law, is comprised of over 30 national civil and human rights organizations, faith and community leaders working to address the nationwide epidemic of police brutality and lethal shootings, claiming the lives of Black men, women and youth; and provide necessary reforms to change the culture of policing in America. For more information, please visit www.lawyerscommittee.org.