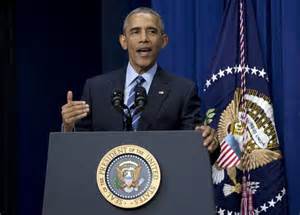 First of all, I love John Lewis.  (Applause.)  And I don’t know where he gets the energy, where he gets the drive, what stores of passion he’s still able to muster after fighting the good fight for so long.  I do know that many of us would not be here in this auditorium today had it not been for the heroism and dedication of Congressman John Lewis.  So I’m so appreciative of him.  (Applause.)

I’m proud to be joined by our Attorney General.  Loretta Lynch has already shown herself to be a champion on behalf of not just the powerful but the powerless, and is, every single day, along with her team, fighting to make sure that we are all equal in the eyes of the law, and that everybody is getting a fair shot.  And so we are very grateful for her presence here today.  (Applause.)

And I want to thank all of our partners, all the organizations, all the leadership from around the country that is represented in this auditorium but also are listening over this live feed as we reaffirm our commitment to one of the most fundamental, sacred rights of any democracy — that is the right to vote.

As John indicated, 50 years ago today, President Johnson signed the Voting Rights Act into law to protect this precious right.  It broke down legal barriers at the state level and at the local level that were keeping African Americans from exercising their constitutional right to vote.  And all of us have a great debt to not just John Lewis, but the thousands — many of them unnamed — who were courageous enough to walk up and try to register time and time again, that were threatened because of their efforts to register — sharecroppers and maids and ordinary folks.  Had it not been for them awakening the conscience of a nation, the President could not have mustered the political support that was required to ultimately get this seminal law passed.

We had the opportunity to honor some of the sacrifices that were made earlier this year in Selma, along with 100 members of Congress — Democratic and Republican members.  It was heartening to see the bipartisan attendance.  It signified that in the abstract, at least, everybody today believes in the right to vote.  Conceptually, everybody is in favor of the right to vote. (Laughter and applause.)  You will not hear anybody defend the notion that the law can discriminate against persons because of their color, or their faith, or their ethnicity, when it comes to going to cast a ballot.  That’s huge progress, a normative shift in how we think about our democracy.  Everybody in theory is supposed to be included.

On the ground, there are still too many ways in which people are discouraged from voting.  Some of the protections that had been enshrined in the Voting Rights Act itself have been weakened as a consequence of court decisions and interpretations of the law.  State legislatures have instituted procedures and practices that, although on the surface may appear neutral, have the effect of discouraging people from voting, may have a disproportional effect on certain kinds of folks voting.

And if, in fact, those practices, those trends, those tendencies are allowed to continue unanswered, then over time the hard-won battles of 50 years ago erode, and our democracy erodes. And that means that the decisions that are made in the corridors of power all across this country begin to reflect the interests of the few, instead of the interests of the many.

So we’ve got serious business to attend to here.  One order of business is for our Congress to pass an updated version of the Voting Rights Act that would correct some of the problems that have arisen.  (Applause.)

And I said when I was in Selma that we’re glad you’re here, members of Congress, but we’ll be even more glad, we’ll be in an even more celebratory mood, if you go back to Washington and reaffirm America’s commitment to what was fought for here at this bridge.

Now, so far, that hasn’t happened.  John Lewis is ready to do it.  There’s legislation pending.  There are people of goodwill on both sides of the aisle who are prepared to move it. But it keeps on slipping as a priority.  Part of the reason we’re here is to reaffirm to members of Congress, this has to be a priority.  (Applause.)  If this isn’t working then nothing is working.  We’ve got to get it done.  (Applause.)

At the state levels, we’ve got some outstanding members of state legislatures — California, Florida — who have been championing mechanisms to get more people voting:  Early voting, online registration.  But sadly, too many states are making it harder for folks to vote — instituting photo ID laws that on the surface sound good; if you poll the average American, they’ll say, yes, you have to show your photo ID.  But in practice, it turns out that for seniors and for poorer folks, that’s not always easy to do.  And by the way, it doesn’t actually address a real problem because there are almost no instances of people going to vote in somebody else’s name.  (Applause.)  It’s just not a — it turns out it’s just not a common crime.  (Laughter.)

Folks, might think about shoplifting.  Attorney General, you know more about the crime statistics than I do, but I am certain, because we’ve actually looked at the data on this, that almost nobody wakes up saying, I’m going to go vote in somebody else’s name.  (Laughter.)  Doesn’t happen.  So the only reason to pass this law, despite the reasonableness of how it sounds, is to make it harder for folks to vote.

You’ve got state legislatures that are rolling back early voting.  I don’t understand why anybody would be opposed to spreading out voting so that people can arrange to vote depending on their schedule.  Because it’s hard — if you are working the midnight shift, and got to get your kid to school, and had to travel by bus, and you’re a single mom — it may be difficult for you to be able to vote precisely in that window that’s provided. And there’s no evidence that, as a consequence of early voting, that has increased fraud; that people somehow have become less committed to democracy; they don’t feel that same sense of civic pride as they do if there’s just one day of voting.  There’s no evidence of that.  The reason to roll back early voting is because you want to make it harder for folks to vote.

So, in theory everybody is in favor of the right to vote.  In practice, we have state legislatures that are deliberately trying to make it harder for people to vote.

And some of them, frankly, are not that shy about saying so.  (Laughter.)  Think about that.  Think about that.  How can you rationalize making it harder for people to vote?  How can you rationalize penalizing people because they don’t have a lot of money not being able to vote?  That’s contrary to who we are.  That’s not what we believe.  That’s not what John Lewis fought for.  In the United States of America, we should have no patience and no tolerance for laws that aim at disenfranchising our fellow citizens.

So we got to keep pushing.  At the federal level, we need a new Voting Rights Act passed.  At the state and local levels, we’ve got to fight back against efforts to make it harder to vote and we got to embrace those legislators that are prepared to make it easier to vote.

But there’s one last aspect to this, and that is the job of citizens in actually exercising the franchise.  This isn’t always a popular thing to say in front of progressive groups — everybody is fired up, and rightly so.  But the reason that the voting rate in the last midterm election was 30-something percent is not attributable to a photo I.D. law.  The fact of the matter is that far more people disenfranchise themselves than any law does by not participating, by not getting involved.

So, yes, we have to be vigilant in pushing back against laws that seek to disenfranchise people.  Yes, we should be fighting back against laws, for example, that say ex-felons, no matter how long they’ve been living a correct life, no matter how well they’ve paid their dues, that they can never vote again in that state.  There are all kinds of battles we have to fight.  But we miss the forest for the trees if we don’t also recognize that huge chunks of us, citizens, just give away our power.  We’d rather complain than do something about it.  We won’t vote, and then we’ll talk about the terrible political process that isn’t doing anything.

And I like barber shop talk.  (Laughter.)  I like grumbling and complaining.  I can’t always do it in public.  (Laughter.)  But what I know is it doesn’t get anything accomplished.  So the groups that are here today, one of the things that we’re looking forward to is how do we mobilize, how do we galvanize, how do we get people focused not only on laws but also on our habits — our habits of citizenship?  How do we instill in people a sense of why this is so critically important?

I want to thank so many of you who are involved in this, including the NAACP, which started their Journey to Justice — a march from Selma to Washington earlier this week — because you’re shining a light on this issue.  And I want to make sure that we are fully mobilized across the country on September 22nd.

Most of all, citizens — seize the power that you have.  Make this democracy work.  Do not succumb to cynicism.  Heroic things happen when people get involved.  Heroic things happen when a young man without any official title joins up with a bunch of other young and not-so-young people of every color and every persuasion and are willing to march across a bridge.  That’s the power that is in all of us.  We got to take advantage of it.

Thank you very much, everybody.  God bless you.  (Applause.)