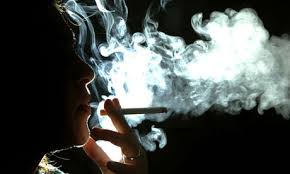 The good news: Smoking rates in the U.S. continue to decline. In fact, the number of adults who smoke is at its lowest since cigarette smoking was first recorded by the U.S. Centers for Disease Control and Prevention in 1965.

The less good news: The national numbers obfuscate specific trouble spots and demographic skews. For example, 43 percent of people with a GED smoked, compared to 5 percent of those with a graduate degrees. More than a quarter of people who live below the federal poverty line smoked, and close to a third of multiracial Americans smoked.

“These findings underscore the importance of ensuring that proven strategies to prevent and reduce tobacco use reach the entire population, particularly vulnerable groups,” Brian King, deputy director for research translation in the CDC’s office on smoking and health, said in a statement.

“Comprehensive smoke-free laws, higher prices for tobacco products, high-impact mass media campaigns and barrier-free access to quitting help are all important. They work to reduce the enormous health and financial burden of tobacco use and secondhand smoke exposure among Americans,” he added.

The CDC researchers expect skewed rates to continue to decrease as the Patient Protection and Affordable Care Act of 2010 improves the number of Americans with access to health insurance and to smoking cessation help through that insurance.  Currently, 27.9 percent of uninsured adults smoke, compared to only 12.9 percent who have private insurance policies.

Smoking is the number one cause of preventable death in the U.S., and greatly increases a person’s risk for lung cancer, heart disease, diabetes and stroke.