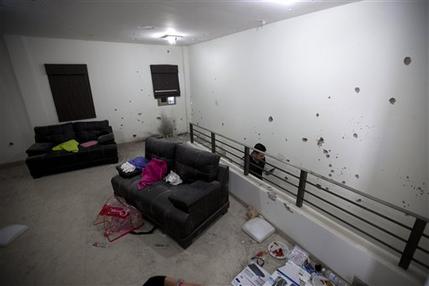 LOS MOCHIS, Mexico (AP) — At 4:40 a.m. in a central neighborhood of the Pacific coast city of Los Mochis, 17 Mexican marines began their assault on a safe house, thinking there was a good chance Joaquin “El Chapo” Guzman was inside. The operation was dubbed “black swan.”

One marine was wounded by gunfire almost immediately and remained outside the front door while his comrades slowly advanced inside behind lobbed grenades and heavy fire, according to video from the marines’ helmet cameras released by Mexico’s government on Monday.

A marine involved in the assault who gave a tour of the house to a reporter from the Mexican network Televisa said there were more people inside than expected and they were more heavily armed, including with rocket-propelled grenades and .50 caliber sniper rifles.

Attorney General Arely Gomez told local radio that people in the house had ordered food for 13 people the night before the raid.

An Associated Press journalist who visited the house Monday saw bullet holes pocking its white concrete walls. Clothing and food – a wheel of cheese, lots of cans – were scattered throughout. Beds were tossed. Blood was smeared on the walls.

The marines had secured the downstairs rooms first.

One gunman was killed just inside a front door riddled with bullet holes.

As the troops prepared to go upstairs, one marine saw a man at the top of the stairs preparing to fire a rocket-propelled grenade. The marine hit the weapon with a couple of shots causing the gunman to toss it, the marine guide told Televisa.

The wall above the stairs was particularly damaged by gunfire as defenders tried to keep the marines from advancing.

Upstairs the marines found two women in a bathroom and two men in a room with a large television.

The home had four bedrooms and five bathrooms. On one upstairs bed were four DVDs from the series La Reina del Sur, starring Kate del Castillo, the Mexican actress who put Guzman in contact with the American actor Sean Penn.

It took about 15 minutes to secure the house. Then the marines followed the attackers across rooftops. Four more gunmen were killed in this pursuit.

There had been no sighting of Guzman.

But knowing his predilection for tunnels, the marines began looking for an opening. Beside a ground floor bedroom littered with clothing, marines entered a walk-in closet and found an unusual panel behind a mirror. Guides showed the AP how a lever hidden behind a ceiling light operated a mechanism that opened a door behind the mirror.

It led to a set of descending stairs.

A 6-foot (nearly 2-meter) tall tunnel complete with lighting, wood-paneled walls and a concrete floor led to more stairs and then a metal hatch opened into the city’s storm sewer. Guzman and his security chief traveled several blocks through the 3-foot (meter) tall storm sewer before popping out in the middle of an intersection. They stole a car, drove a bit, then stole another.

Federal police eventually found them on a highway outside of town and Guzman’s flight ended six months after his stunning escape from the same maximum security prison where he now sits.