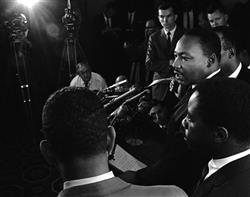 Events free and open to the public except where noted.

Through February 29, 2016: Annual Helen Keller Art Show in the Vann Gallery.  Art show featuring entries from visually and hearing impaired children in the State of Alabama.

Saturday and Sunday, February 5 & 6: “This Little Light of Mine” BCRI partners with Red Mountain Theatre Co. in presenting this one-act play about Fannie Lou Hamer’s life as an American voting rights activist and civil rights leader. Alabama native and MacArthur Fellow Billie Jean Young writes, directs, and stars in this one woman show, an intimate portrayal of the triumphant spirit of Civil Rights icon Fannie Lou Hamer. Young is internationally acclaimed for this drama and has performed it on four continents. Get tickets at (205) 324-2424.*

February 6 – February 13, 2016: BCRI will exhibit art from its collection at the Birmingham Children’s Theatre‘s “Tuxedo Junction,“ a musical based on the early life of legendary jazz musician, and Birmingham native, Erskine Hawkins. Get tickets at 205-458-8181.*

Rivero, who was recently appointed Executive Director of the Museum of African American History (NTHP), Boston & Nantucket, will discuss how and why the National Trust for Historic Preservation and its state and local partners work to protect significant places representing our diverse cultural experience. Sites of memory include places of both local and national importance such as Birmingham’s A. G. Gaston Motel.  The Gaston Motel was named a National Treasure by the NTHP in 2015, when it was also named to the Trust’s list of the nation’s 11 Most Endangered Historic Places.

“We are honored to have Marita Rivero as our special guest,” said BCRI President & CEO Andrea Taylor.  “Rivero brings a wealth of personal and professional experience to the topic of preservation and African American history.”

Rivero has had a distinguished career in public broadcasting, which began in 1970 at WGBH Boston, where she produced public affairs television programming.  Her projects received numerous major production awards, including the Peabody and Emmy Awards for WGBH/PBS’ Africans in America, a History of Slavery.

In her new role, Rivero oversees some of the nation’s most important National Historic Landmarks — on Boston’s Beacon Hill the first African Meeting House in the nation, and on the Island of Nantucket the Florence Higginbotham House, believed to be the oldest home built by a black family for their own occupancy, and the African Meeting House, the island’s most vivid reminder of a thriving 19th-century African American community. The program is free and open to the public.  Please register at www.bcri.org.

Through Monday, February 29, 2016: “American Boricua,” a documentary photography exhibition by award winning photojournalist Wanda Benvenutti.  BCRI and the Alabama Humanities Foundation, state affiliate of the National Endowment for the Humanities, have partnered to present “American Boricua,” which resides in the Woolfolk Gallery.