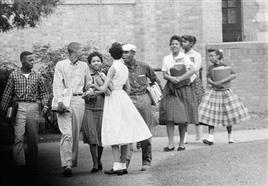 Proving their intellectual worth in the face

of racism takes a mental and physical toll

According to a recent study, black students who succeed at elite universities may do so at the risk of their mental well-being.

Researchers at Vanderbilt University’s Peabody College of Education and Human Development claim researchers are ignoring a mental health crisis for black college students who have had to draw on mental toughness and perseverance to achieve in predominantly white academic institutions.

Being resilient is required for any college student, said Ebony McGee and David Stovall, the study’s authors, but black students bear the extra burden of proving their intellectual worth in the face of overt or covert racism. And that takes a mental and physical toll.

“Weathering the cumulative effects of living in a society characterized by white dominance and privilege produces a kind of physical and mental wear and tear that contributes to a host of psychological and physical ailments,” said McGee, assistant professor of diversity and urban schooling at Vanderbilt. “We have documented alarming occurrences of anxiety, stress, depression and thoughts of suicide, as well as a host of physical ailments like hair loss, diabetes and heart disease.”

Grit, a buzzword that describes the type of determination students must embrace if they want to succeed, has become associated with the success of students from disadvantaged communities and communities of color, where schools are often understaffed and under-resourced, and where students may not have strong support systems at home.

Currently there is much debate about whether students should be taught grit versus forcing colleges to recognize the additional challenges African-American students face in earning a degree.

“Those who are struggling with the multiple burdens associated with being a black student must be protected against daily discrimination,” said Stovall, an associate professor of African-American studies and education policy at University of Illinois at Chicago. “In contrast to research that concludes with messages of the need for grit and a tougher mental attitude, a more holistic perspective focuses on gaining a thorough understanding of the psychological, emotional and mental harm these students endure.”

The researchers named this phenomenon “John Henryism,” after historical figure John Henry, a slave who worked himself to death in order to prove his worth.

“John Henryism is a coping strategy often adopted by high-achieving African Americans, who may unconsciously sacrifice their personal relationships and health to pursue their goals with a tenacity that can be medically and mentally deleterious,” the study’s authors said. “The process of healing from racial battle fatigue and institutional racism requires significant internal commitment and external support. Black college students are brilliant, talented and creative, and they dream as big as other students. Pursuing higher education should not make them sick.”