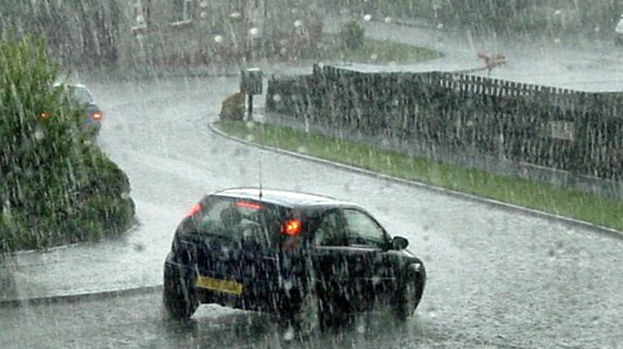 BY MAX BECHERER AND MELISSA NELSON

CONVENT, La. (AP) — Tornadoes ripped through an RV park in Louisiana and significantly damaged nearly 100 homes and apartments in Florida, and forecasters warned that more twisters were possible Wednesday as the deadly storm system moved to the East Coast.

One of the hardest-hit areas along the Gulf Coast on Tuesday was a recreational vehicle park in the town of Convent, in southern Louisiana. RVs were tossed about and lay on top of wrecked cars and pickup trucks.

Two people were killed there, and 31 injured people were taken to area hospitals, said St. James Parish Sheriff Will Martin. Seven of them were in critical condition, he said.

An all-night search of the RV park found no additional injuries or fatalities, the sheriff said. Three people were still missing and Martin said he hoped to locate them Wednesday.

Briaxton Lott, 23, was in the trailer park when the tornado hit. The pad where his trailer once sat was empty and he pointed to the remnants of his trailer about 100 feet away.

“The whole front end came up and slammed back down, and I grabbed up the baby and the next thing I know we just went rolling end over end,” Lott said.

His destroyed trailer ended up right next to three trailers that appeared untouched. Children’s toys were scattered in the mud, and an alarm could be heard going off in the morning, likely alerting a long-gone resident it was time to go to work. Remains of the jumbled and mashed trailers and vehicles were scattered across the park.

Lott, who was in the trailer with his wife, two kids and their dog, didn’t even know where the top of his trailer was. He came back in the morning to dig out some possessions, including family Bibles and items inherited from an uncle who passed away.

Thousands of people across the Gulf Coast region were without power and the threat of more tornadoes remained. At least 88 million people along the East Coast were at some sort of risk of severe weather Wednesday, the Storm Prediction Center said.

Some of the larger metro areas included the North Carolina cities of Raleigh and Wake Forest. Straight-line wind gusts may be particularly strong, reaching 70 mph or greater.

Forecasters with the National Weather Service had to take cover Tuesday in a shelter in Slidell, Louisiana, because a tornado was nearby. Lightning took out the office’s radar, forcing them to use backups.

“We felt the shockwave go through the building,” said Ken Graham of the National Weather Service.

By 7 a.m. Wednesday, Albany, Georgia, had recorded 3.58 inches of rain in a 24-hour period. In Atlanta, the two-day total was approaching 3 inches before dawn Wednesday.

Schools were closed in parts of Georgia, Florida and South Carolina ahead of the storms.

He stopped at The Moorings apartment complex, where winds whipped the roof off of at least two buildings. A tangled wall of tree limbs and power lines partially blocked the entrance to the apartment complex. A large oak tree fell on the side of one building and dozens of cars in the parking lot were smashed under a layer of wood, twisted metal, insulation and other debris.

“I was on the phone with my sister. I heard the trees flying through the air and hitting things,” said resident Sherman Matthews. “We are fortunate no one was killed.”