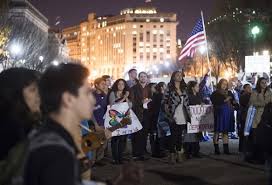 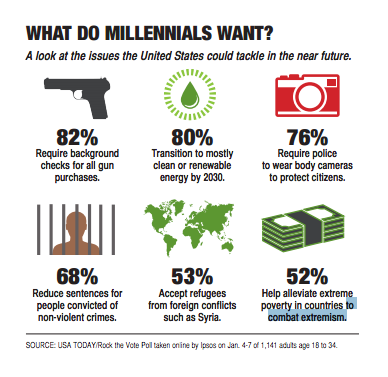 Millennials are those born between the early 1980s and mid-2000s and make over one third of the country’s population.

They are 31 percent of eligible voters and a generation that candidates arguably should focus on attracting for the 2016 presidential.

Here’s what presidential candidates need to know about millennials:

According to a USA Today poll, 80 percent want to transition to mostly clean or renewable energy by 2030. Also, 76 percent want to require police to wear body cameras to protect citizens, and 53 percent want to accept refugees from foreign conflicts such as Syria.

Jasmine Linson, 24, a millennial who lives in Birmingham, said, “I’m an Equal Rights advocate — and not just for homosexuality and race — but more on a morality basis.”

The millennials were born with the Internet and has spearheaded social media and are different from Generation X (those born between 1965-1980).

While previous generations tend to be more conservative on policies both domestic and foreign, some millennials tend to focus on social, environmental, foreign and domestic policies more liberally. 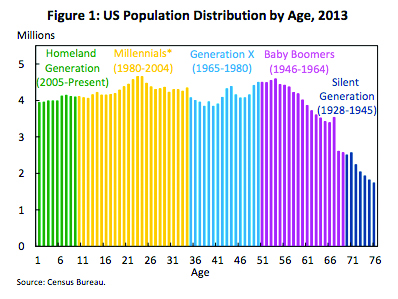 So far, millennials seem to favor the Democrats but are split between Vermont Senator Bernie Sanders and former U.S. Secretary of State Hillary Clinton.

Sanders has promised a policy to keep undocumented people who have been in the U.S. for at least five years to stay without fear of being deported.

Clinton has promised to enact “comprehensive immigration reform to create a pathway to citizenship, keep families together and enable millions of workers to come out of the shadows.”

Millennials are more educated than some of their generational predecessors.

Over 61 percent of adult millennials have attended college, whereas only 46 percent of the Baby Boomers did so. Many college-going millennials are more likely to study social science and applied fields — communications, criminal justice, library science — that correspond more directly to specific field, according to the U.S. Census.

Many from the Boomer generation (those born between 1946-1964) studied business or education.

Millennials are also a very diverse generation. For example, 42 percent identify with a race or ethnicity other than non-Hispanic white, twice the share of the Baby Boomer generation when they were that age.

But can the presidential candidates win over millennials who are possibly the most progressive generations the U.S. has ever been?

“No matter what president we get — in my opinion — it’s all the same,” said Malachi, 30, a millennial who does not believe in voting for national elections and did not want to give his last name. “They make people think we’re getting different options, but we’re really not.”

Malachi used healthcare as an example. “Hillary thought that it should be mandated that you have health insurance. Obama says, ‘no, I don’t want health insurance to be mandated.’ So he doesn’t make it mandatory for you to have insurance, but he imposes a mandatory fine if you don’t have it. So it’s almost the same thing.”

“So many people in our past fought for us to have the right to vote,” Linson said. “We owe it to historians to educate ourselves in politics and use what has been given to us. We need to be the voice and have an attitude for change instead of just plain acceptance.”