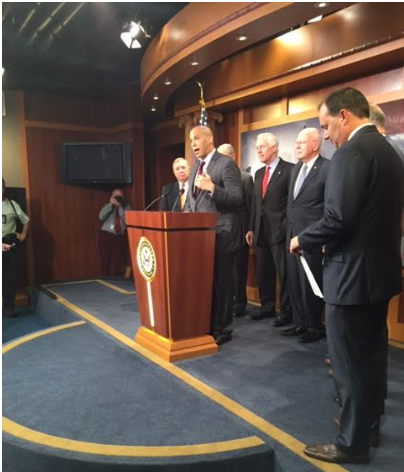 Planned reforms to federal drug and sentencing laws that imprisoned many African-Americans have become locked up by election-year politics.

“The cost of incarceration and a growing awareness of the problems with mandatory minimum sentences have created a diverse coalition calling for reforms,” said Kevin Ring, of Families Against Mandatory Minimums.

President Obama has made this issue a priority. He issued an executive order in January to prohibit solitary confinement of juveniles. He discussed criminal justice reform in his latest State of the Union address, and pardoned 95 federal inmates at Christmas. He also became the first president to visit a federal prison.

Judiciary Chairman Chuck Grassley (R-Iowa) introduced this legislation, which enjoys 28 Senate co-sponsors. “Our sentencing bill is a compromise that shows that senators from both sides of the aisle can come together to address a serious problem in a reasonable and responsible way,” Grassley said.

Senator Ted Cruz (R – Texas) voted against the bill. As amended, it provides “leniency for violent criminals who use guns and gives lighter sentences to criminals already serving time,” he said before the Judiciary Committee.

“That claim is false and does not factually line up with the reality of who is behind bars in our federal prisons,” said Senator Cory Booker (D-New Jersey) in response to critics who say the bill would free violent criminals. “Each case must also go before a federal judge, with the prosecutor present for an independent judicial review.”

Grassley’s measure addresses several stringent sentencing provisions that have helped swell the federal prison population over the past 30 years. It would repeal the “three strikes” law that requires a mandatory life sentence without parole for anyone with a third conviction on drug or violent-felony charges. Instead, the bill creates a mandatory 25-year sentence.

This legislation retroactively applies a 2010 sentencing-reform provision that reduced the disparity between crack and powder cocaine penalties. This change alone would let about 6,500 prisoners petition the courts for release or reduced sentences. Grassley’s bill also includes juvenile-justice reforms and language to help former prisoners transition back into society.

Senate Majority Leader Mitch McConnell (R-Kentucky), facing pressure from tough-on-crime Republicans, has not said whether he will allow a vote on Grassley’s proposal. “Our system of justice is not broken,” former U.S. attorney general John Ashcroft wrote last month in a letter to McConnell, signed by 40 high-ranking former law-enforcement officials. “Mandatory minimums have caused a dramatic reduction in crime.”

Reform advocates do not consider Grassley’s legislation the major overhaul of mandatory-minimum sentences for which they long have fought, saying his bill does not go far enough.

“It’s a Goldilocks reform bill. It’s not too much. It’s not too little. But it’s better than nothing,” said Nkechi Taifa of the Open Society Policy Center. “There was a time when this looked like a slam dunk…It was the right issue at the right time. Now it is not so clear.”

This bill only applies to the federal justice system, where about 200,000 inmates are held. This is just 8 percent of the 2.5 million Americans confined to state prisons and local jails.

While the Senate’s path remains clouded, the measure has a brighter future in the House. Legislators and reform advocates consider Speaker Paul Ryan (R- Wisconsin) an ally in overhauling sentencing and drug laws. Ryan said he supports all the measures that have cleared the House Judiciary Committee. “We will schedule floor time for them,” Ryan told journalists at a recent Capitol press briefing.

Until then, reformers sound as impatient as ever.

“All there has been is talk, and more talk,” said civil rights leader Barbara Arwine. “Action is long overdue. Mass incarceration threatens many of the gains we fought for in the Civil Rights Movement. It’s time for a vote.”