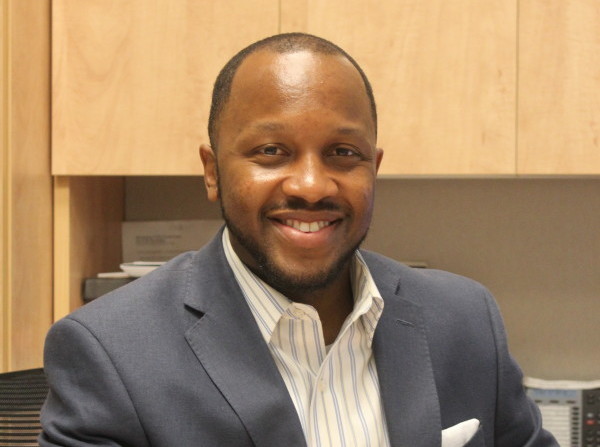 For Anthony Sparks, the noise level of dozens of children cheering and getting themselves prepared for a day of activities at the YMCA on 7th Ave. North was normal for 8:30 a.m.

His morning started the same as always: with his 4-year-old son walking into his room and snuggling between Sparks and his wife.

“He likes to get the rest of his sleep out, directly in my back,” Sparks said. “After that I’m up.”

As Executive Director at Birmingham YMCA Youth Development Center, Sparks spends a lot of his time motivating young people, but his words of encouragement aren’t solely for children. He also has Anthony D. Sparks, LLC where he is an author, speaker, and development coach. He started in banking, but soon realized that he had a bigger calling in life.

“My purpose was more slanted towards trying to impact people on a different level,” Sparks said. “It was an opportunity for me to tap into what I feel is more in line with my purpose.”

If you ask Sparks his goal for clients and people he speaks with, it’s simple: to live a life of reason, intentionally.

“I want to help people not achieve accidentally, but be intentional about what they are trying to do,” he said.

Sparks’ book, #BETTER: 7 Keys to Living a Life of Progression, Not Perfection, is something that he said came from an internal point in his life.

“The seven areas that I delve into are areas that I’ve had either some struggle with, and they’re things that I know other people have struggled with,” he said. “Like moving on from past situations or hurts, being able to let go of issues that have had you bound for a while, or appreciating love.”

The book was published in 2014 and Sparks said he still gets comments about it from strangers.

“People will say, ‘Hey that book blessed me then, and it’s still blessing me to this day,’ and it feels like affirmation that I hit the right things to talk about in [the book.]”

Sparks is a 2002 graduate of Ramsay High School and a 2007 graduate of the University of North Alabama, where he received both his bachelor’s and master’s degrees in Business Administration.

Sparks, 32, gives many speeches and talks to students, and later this summer is expected to speak at a youth retreat. But with all of the mentorship he does there are two people that he looks to for guidance: his father Andra Sparks, presiding judge for the City of Birmingham Municipal Court and his uncle Cedric Sparks, Executive Director of the Birmingham Division of Youth Services.

“I’ve been blessed with an awesome family,” he said. “I’ve learned from them how to be a professional, how to be a husband, how to be a father and just how to be Anthony. They don’t put on airs.”

His other teachers are his wife, Ashley and son, Aidan.

“I heard my dad say ‘Your wife is the second greatest gift from God that you have, next to your salvation,’” Sparks said. “I’ve been married for six years, and I didn’t understand what he meant until I got married.”

His other teacher is his son.

“He looks to me for everything and that humbles you,” he said. “But it also gets me in gear to get myself together because this life is depending on me.”

As for the future of Anthony D. Sparks, LLC, he hopes that he will be able to work for it full-time.

“I do meaningful work here at the youth center, but I know I can’t be here forever, I know someone better will come in, and I just pray that when that time comes, I will be able to give my all for my LLC.”

With his work touching thousands of people, he said he hopes that they understand the one point he wants everyone to get: everyone needs to be their best self.

“I want to die empty,” Sparks said. “When I leave any place I have touched I want to say I have nothing left to give that place. I used up every gift, talent and resource I could to really get the most out of where I was.”