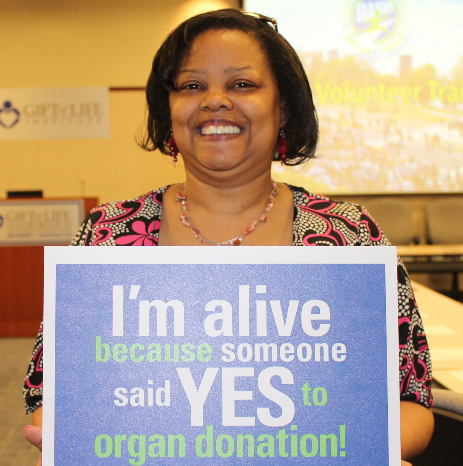 Angela Johnson of Pell City is among the fortunate ones.

The mother of two started receiving dialysis treatments in 2009, as her kidneys deteriorated. The blood-cleansing sessions were done three days a week, and each lasted several hours. But she was able to resume a normal life in 2013, after receiving a donor kidney that freed her from dialysis.

“[The transplant] gave me a second chance at life,” said Johnson, 46, who works as a sales associate at the Outlet Shops of Grand River in Leeds.

Many African-Americans are on waiting lists for kidneys, hearts, and other organs — and often not as fortunate as Johnson.

While the number of blacks receiving donations has increased in recent years, there “is still a way to go” to meet the needs for organ requests in the community, according to medical professionals.

African-Americans are the largest group of minorities in need of organ transplantation. Blacks make up 13 percent of the U.S. population; of those awaiting organ donations, 34 percent are waiting for kidneys and 25 percent for hearts.

Other statistics of note:

“African-Americans are much less likely to find a living kidney donor because of a prevalence of comorbidity issues, such as diabetes and high blood pressure, in the community,” said Dr. Jayme Locke, who, along with Dr. Michael Hanaway led the University of Alabama at Birmingham (UAB) team that handled Johnson’s transplant. “These issues make [potential donors] less medically suitable.”

At least 22 people in the U.S. die daily awaiting organ transplants, according to the White House, which has launched a campaign to reduce the long waiting lists for those in needs of hearts, kidneys, livers, and other tissue.

A number of groups aim to increase minority donors and reduce the waiting lists through health promotion, disease prevention, and face-to-face interactions with members of the black community.

“The message is received better” with in-person educational visits, Miles said, “… people begin to see that you are not coming to take their organs when you ask them about signing donor cards, but that you actually care about them.”

There are other reasons why many African-Americans are hesitant to donate organs, according to medical experts: religious objections; skepticism about proper care during surgery; lack of renal disease and transplantation awareness.

UAB’s Locke also cited the effects of the Tuskegee Syphilis Study, which “has had a horrible and profound, long-lasting effect. On a continuum, it moved many African-Americans over from trust to mistrust,” said Locke, who is an associate professor of surgery at UAB and director of the university’s Incompatible Kidney Transplant Program.

The medical community must earn the trust of African-Americans again, she said.

Although the total number of white Americans on organ transplant waiting lists is about 1.5 times greater than that of black Americans, the report continues, the number of candidates waiting for a kidney transplant is almost the same between blacks and whites.

In addition, research shows that 25 percent of people waiting for heart donations are black, according to the HHS.

African-Americans have higher rates of diabetes and high blood pressure than white Americans, the HHS report points out, and these conditions are known to put patients at risk for organ failures.

Dr. Clive Callender, professor of surgery at Howard University in Washington, D.C., and founder of the National Minority Organ Tissue program, said education and empowerment can prevent the high rates of obesity and illnesses that trigger the need for organs in the African-American community. Alleviating the demand for heart, kidney, liver, and tissue transplants revolves greatly around lifestyle changes, he said.

UAB, along with the John Hopkins University and Northwestern University medical schools, will participate in a new Living Donor Navigator Program. According to UAB, the local effort will target African-Americans in order to help “leverage their personal connections” and social networks in order to amplify the need for organ donors and identify live-donor candidates.

“African-Americans face a significantly higher incidence of end-stage renal disease and disproportionately low rates of live-donor transplantation, so the need in this community is real and vital,” said Locke, who will oversee the UAB program. “The Living Donor Navigator Program, which has been tested at Johns Hopkins University and other places, is associated with a more than fivefold increase in identification of potential live-donor candidates. We are excited to launch this program at UAB and hope we will see the same type of impact in the communities we serve.”

According to UAB, its Living Kidney Donation Program enables a healthy individual to donate a kidney to someone in need of a transplant, the surgical placement of a healthy human kidney into the body of a patient with kidney failure. Because of the lack of available deceased-donor organs, the program helps to meet the growing need for organs among those awaiting kidney transplantation.

About 100,000 people in the U.S. are awaiting kidney transplants, including 4,000 in Alabama—but there are only enough donor kidneys for 11,000 people.