There has been a change in the food chain in the Southern Intercollegiate Athletic Conference. After winning the 2015 league football title, the Miles Golden Bears are no longer the hunter.

“Now, all of a sudden, we’re being hunted,” Coach Reginald Ruffin said. “That’s a testament to the commitment from the administration, the student-athletes we’re bringing into the program and assistant coaches.”

Alabama NewsCenter is posing five questions to state college coaches as the 2016 football season draws near. First up are Ruffin and his Golden Bears, who open the season at 4 p.m. Sunday, Sept. 4, against Fort Valley State in the Labor Day Golden Classic at Legion Field.

ANC: What is the season outlook?

Ruffin: We’re blessed to have a lot of returning veterans. We have so many second- and third-year football players. We return eight starters on offense and we return six on defense, and a lot of guys have a lot of game experience. The learning curve won’t be as steep as it was the last couple of years with new guys coming into a new program, a new system. All the guys are familiar with the system, so that’s a blessing for us.

ANC: What is your team strength?

RR: Defense means championships, but I think offensively, with so many starters returning on offense, I think the strength should be our offense. We only lost one guy (on the) offensive line. All the receivers are back and all the running backs and the quarterback – the starter and the backup are both back.

ANC: Who are your standouts?

ANC: What game do fans have circled on your schedule?

RR: Hopefully Fort Valley, because that’s our first one. You can’t say you want to be a national champ contender if you lose the first game. It’s the Labor Day Golden Classic. It’s the first game. It’s big for the city. It’s big for Fairfield. Our fans are all up for that. Of course, they’ve always circled Tuskegee. That’s been a tough matchup over the years and the winner of that game has been the conference champ, or played for the conference championship.

ANC: What is your team’s lingering question mark?

RR: Depth is a big concern from the standpoint of linebacker and in the offensive line. 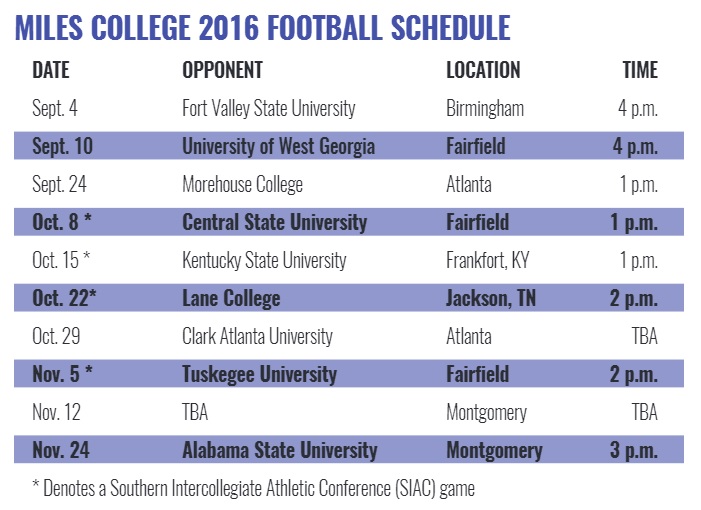