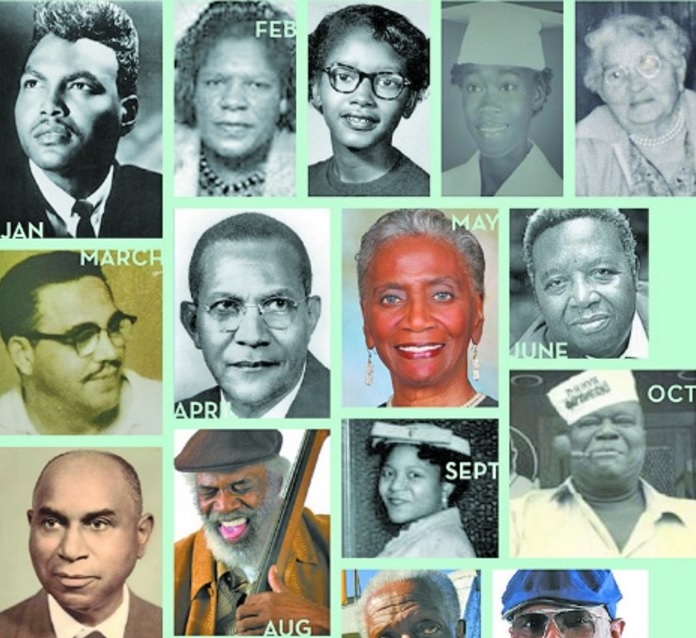 Cleveland Josephus Eaton II remembers the fear he had when he was diagnosed with cancer.

“I thought it was going to stop me from playing my music, but I didn’t stop,” Eaton said.

The 77-year-old Fairfield, Ala., native has survived cancer twice: the first time for throat cancer, and the second time for prostate cancer.

Eaton underwent a total of 80 treatments and said he couldn’t have survived without strength from God and his wife, Myra Eaton.

“She took great care of me, between taking me to chemo and caring for me at home,” he said. “I know I couldn’t have done it without her.”

On Nov. 10, 2016, Eaton was one of the 12 honorees for the 2017 Alabama African-American History Calendar, which is being published for the seventh year by AT&T Alabama to highlight the achievements of people from the state who have made a difference. With this calendar, 84 African-Americans who have had a compelling impact on Alabama and far beyond have been recognized.

“Our state’s rich heritage is built and molded by many extraordinary people from all walks of life,” said Fred McCallum, president of AT&T Alabama. “The calendar enables us to gratefully recognize the impact the honorees have had on so many lives, while also assuring that their stories are told and preserved to educate and inspire future generations.”

Eaton said he was honored to be on stage with the other honorees, which included Vanzetta Penn McPherson, who worked for 30 years as a civil rights lawyer and federal magistrate judge; Charles Eric Lincoln, a renowned scholar, author, and lecturer; Autherine Lucy Foster, the first black student to attend the University of Alabama; and Frederick D. Reese, a civil rights activist who marched in Selma.

“I’ve been honored, but never like that,” Eaton said. “I was on stage with so many famous and historic black people. And the fact that it was in Birmingham was a great honor.”

Eaton was born in 1939 in Fairfield, and his interest in music began when he started playing his mother’s piano. Between the ages of 8 and 15, Eaton learned to play the saxophone, trumpet, and at the behest of his music teacher at Fairfield Industrial High School, John Springer, the string bass and tuba.

During his time at Tennessee Agricultural and Industrial State College (now Tennessee State University), he played in a jazz band while majoring in music. Afterward, he moved to Chicago and joined the Ike Cole Trio. Other jazz bands on Eaton’s resume: the Donald Byrd–Peppe Adams Quintet; the Larry Novak Trio; and the Ramsey Lewis Trio, with whom he spent 10 years as bassist.

Eaton’s longest professional relationship, however, was with jazz legend Count Basie. Eaton told The Birmingham Times in 2015 that the job with Basie and the Count Basie Orchestra came in 1979, after ending his 10-year stint with the Ramsey Lewis Trio over failure to receive a raise. Eaton said he didn’t know what he was going to do, but he trusted God to lead him on the right path. His trust resulted in Basie calling him to fill in for a bassist who was out sick. Eaton was supposed to work with the Count Basie Orchestra for two weeks, but Basie was impressed with Eaton’s ability.

“After two weeks, [Basie] took me aside, said he was cutting the other guy loose, and asked if I wanted the job,” Eaton recalled in a 1997 interview with UAB Magazine.

Saying yes to the offer began a 17-year collaboration with the Basie Orchestra. As reported by The Birmingham Times, Basie himself called Eaton “my personal bassist, and one of the best of all times.”

In addition to collaborating with other artists, Eaton in 1974 created his own band—Cleve Eaton and Co. In 1975, his album “Plenty Good Eaton” became a seminal classic in funk music.

As an honoree in this year’s Alabama African-American History Calendar, Eaton had the privilege to share his experiences with students at a local Birmingham school.

“They had a lot of questions about my career and how I got started,” Eaton said.

During the visit, a student musician performed with him, as well as guitarist Joe Carnaggio. Teaching people about hard work and how far it got him is one of the legacies he hopes to leave.

“You can’t just want music to take you all over the world and expect it to happen,” Eaton said. “You’ve got to work for it. That’s what I did.”

Eaton said he would practice eight and nine hours a day and as a result could perform anyone’s mu sic.

“I had to go to Miami one time to sub for The Hi-Lo’s, [a quartet]. I’d never seen their music before, but I went right on stage and started playing,” Eaton recalled. “If I didn’t know how to read music, I couldn’t have done that gig. You have to be that good.”

Reading music accounts for a lot of his success, he said.

“Reading music is the biggest challenge, period,” he said. “A lot of kids are lucky and become big stars because of the breaks they get, but they can’t read a note of music.”

Though he’s traveled the globe, Eaton refuses to live anywhere else but Birmingham.

“I’ve been all over the world, and I’d rather live in Birmingham than anywhere else,” he said, because for him the Magic City is home.

Eaton, who now lives in Bush Hills, has never missed an opportunity to give back to his beloved Birmingham. After moving back to the city, Eaton became part of the University of Alabama at Birmingham’s (UAB’s) music department faculty in 1997. While at UAB, he created and conducted the university’s Jazz Ensemble. He also headed his own record company based in Birmingham.