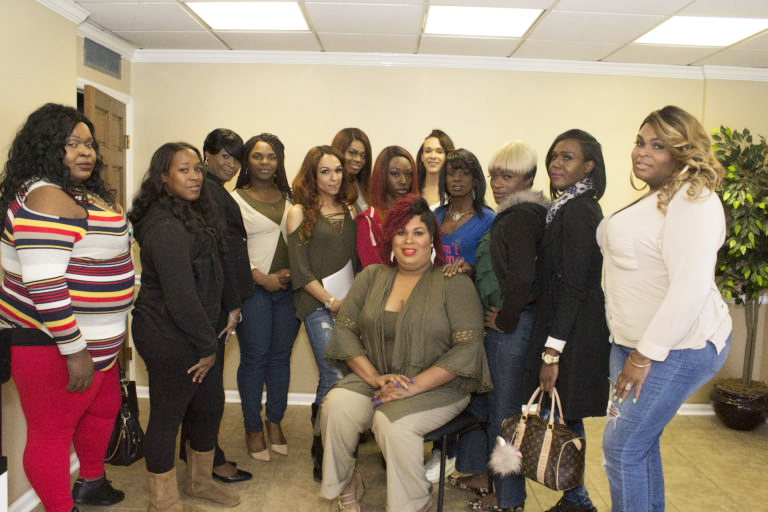 The rules, written on the whiteboard, were clear: No talking over one another. One diva, one mic, and nothing leaves this room.

The room was inside a center on the Southside where TAKE—Transgender Advocates Knowledgeable and Empowering—was helping to guide trans men and women going through their journey of transitioning. During today’s sessions, participants talked about what to expect during the procedure, asked medical questions, and signed up for health care.

“Job discrimination, housing discrimination … victims of violent crimes. You name it, there are more difficulties for us,” Duncan said.

Another challenge is that many in the black community are not familiar with the trans community.

“I’ve heard that being trans is anti-blackness. It’s not,” Duncan said. “It comes down to ignorance and being uneducated. You can go to school for years, but if you’re not trying to evolve as far as looking at different backgrounds, cultures, and beliefs besides your own, then you won’t be able to see the trans identity for what it really is.”

TAKE members have benefitted from the organization in numerous ways. One member, Nycola Hayes, 36, got her name changed in August 2016 with help from TAKE.

“Doing the process through TAKE was a lot easier, and it was taken more seriously,” Hayes said. “There were still a lot of challenges …, but having [Duncan] to help made things better because she knew who to contact.”

Finding jobs and housing can be especially challenging, said Hayes, who volunteers at TAKE.

“I haven’t worked in a while, but usually if I worked somewhere it was because I knew someone at the job—a manager or a friend knew someone who worked there. If I tried myself, it would have been hard to get a job,” Hayes said.

Housing is the same, she said. Two years ago, she was denied renting a home before she changed her name.

“I saw a house I wanted to rent and went to sign the paperwork. I went there as myself, how I always am, and the guy was being so nice. He was offering to waive the deposit fee. Later, when he paid attention to my ID, he completely changed,” she said. “After that he wouldn’t even call me about the house. He texted me and told me I had not gotten approved, even though I had gone through the paperwork and everything was fine.”

Hayes thinks that many people are afraid of living near trans people because of stigmas: “I guess when they think of trans people, they think whores, party animals, child molesters, and illegal activities. We’re people. Respect us. Everybody is different. We still need a place to sleep.”

“My manager makes me feel very uncomfortable,” she said. “I’ve explained to him that my name is Karina, and he uses my government name. They haven’t given me a name tag at my job, and everyone else has one. When I ask for it, the response is always, ‘We’ll work on it.’”

Harris said she puts aside her feelings of being disrespected for the sake of her job because “it’s hard keeping one when you are trans.”

“So often they are looking for a reason to fire you, or they make you feel so uncomfortable to where you want to quit,” she said. “People need to realize that we’re not monsters, we’re not an abomination. Just open your mind.”

TAKE has been Harris’ family: “It’s sad to say that I don’t have a support group in my family. They don’t call me the right name, and they only speak to me occasionally.”

Harris wishes the black community would be more accepting.

“It’s so sad to say that sometimes the white community is more open and accepting to the trans community than our own people,” she said.

Both Sides of the Story

Duncan has reached out to the U.S. Department of Justice and the Birmingham Police Department to speak about protecting members of the trans community.

“The police need to be respectful. Training is needed. [They shouldn’t] misgender victims or say ‘It was a man dressed as a woman.’ [They should] use the proper preferred pronouns. No matter how they may feel, no matter how prejudiced they may be, they must still show respect.”

Harris said she wants law enforcement to treat violent crimes against trans people the way they would handle those committed against anyone else.

When it comes to progress, Duncan said she wants to see how progressive Birmingham really is, based on how it treats the trans community: “What can Birmingham do to make trans people feel more inclusive … [and] have access to things in this city?”

Duncan would like to establish a resource center for TAKE by the end of the year.

“I want it to be a place that offers supportive services: life coaching, GED diplomas, education, transitional health information, job-readiness training, an interview-clothing closet,” she said. “It will be an all-around resource center, a place that will be employed for trans women to keep them employed. I want these women to know that Birmingham can be home because they will always have a place that’s here for them to fall back on if they ever need it.”