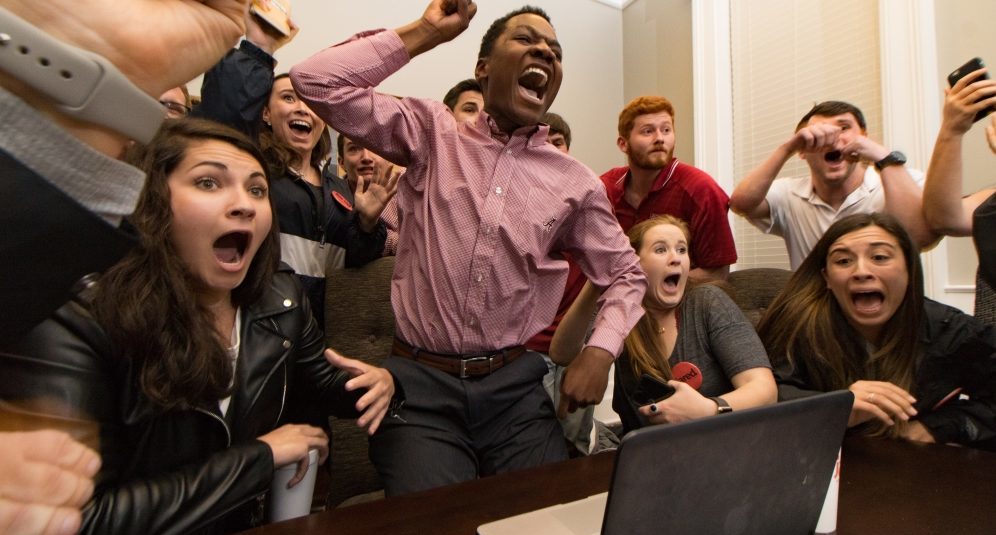 BIRMINGHAM, Ala. (AP) — A black University of Alabama student supported by a secretive campus group long controlled by whites has been elected student government president, breaking a barrier that seemed unlikely to fall a few years ago.

Junior marketing major Jared Hunter won the office in balloting Tuesday, carrying 54 percent of the vote in a three-way race.

Hunter won after writing a column in the student newspaper, The Crimson White, stating he was supported by a campus organization called The Machine, which is composed of the most prestigious, historically white fraternities and sororities on campus. Blamed for various acts of wrongdoing for years, the group has controlled campus politics for generations.

Speaking in an interview with The Associated Press on Wednesday, Hunter said he’s been told he was the first black candidate ever backed by the group for SGA president, but race never became an issue in the election.

“It still feels pretty unreal that I won,” he said.

Hunter is the first black member of the Theta Chi fraternity at Alabama and got the Machine endorsement. Running on a platform that included more intercultural events on campus, combatting sexual assault and free soft drink refills at football games, Hunter defeated two white candidates including the incumbent, who was seeking re-election.

Two other black candidates have been elected student government president at Alabama — independent Elliot Spillers most recently in 2015, when he received the support of some white fraternities. But no other black has ever been acknowledged as being backed by The Machine.

In publicly announcing his support by The Machine, Hunter wrote that he had misgivings about accepting the group’s support after being told it wanted to back him.

“Running for office with the support of a group with such a checkered past was one of the hardest decisions I have ever made,” he wrote in a column published by The Crimson White before the election.

Stories of Machine actions aimed at opponents are numerous through the years — a burglary, a cross-burning, vandalism, social ostracism, to name a few. The student government association was temporarily disbanded two decades ago after a non-Machine presidential candidate claimed she was assaulted, and a former Tuscaloosa school board member sued over claims the group improperly swayed a city election by providing students with booze and concert tickets in 2013.

Hunter, who grew up in Wetumpka near Montgomery, wrote: “The Machine’s stigma casts a shadow on the history of this university to this day. I wrestled with the dilemma – and eventually realized I had an incredible opportunity. I knew my campaign and my ideas were my own. No matter who chose to support me, I would run on my own terms.”

After publication of the column, a campus board found Hunter violated campaign spending rules by paying a $500 bar tab for other students at a campaign kickoff party and subsequently lying about what had happened. The board also ruled he had overspent a $1,000 limit on campaign spending, but Hunter denied wrongdoing and won the election despite the decision.

The election of a black Machine candidate comes after years of change at Alabama, which once was racially segregated but has used aggressive recruitment and building programs to transform itself and grow dramatically since 2003, when enrollment topped 20,000 for the first time.

With a student body that was long composed mainly of Alabama natives, the university’s fall 2016 enrollment of 37,665 students included 55 percent out-of-state residents. The student body is about 12 percent black.

Targeted by protests over racial exclusion four years ago, the university’s traditionally white sororities now have a small number of minority members, and Hunter said other white fraternities have selected blacks as members.

The university last year developed a plan for increasing diversity in the Greek-letter groups in consultation with the Justice Department, and it’s in the process of hiring its first diversity officer.

At Alabama, Hunter said: “Everything has changed.”