Neighborhood association presidents like Kevin Powe, of Acipco-Finley in North Birmingham, and Marine Coleman, of Tuxedo in West Birmingham, said young people need opportunities that will keep them away from the streets and help them move in the right direction.

Powe said, “[We must] help empower our youth instead of tearing them down. We, as city leaders, … can start by leading by example and learning how to compromise with each other.”

Coleman said, “We have to get out and talk with them, find out their ideas or what they’d like to see happen in the neighborhood.”

Homicides in Birmingham have increased 80 percent since 2014. And several widely-reported murders of young black males have raised concern among elected officials, law enforcement, and community leaders.

John Wilson Jr., president of Grasselli Heights Neighborhood Association in Southwest Birmingham, said, “A lot of children just quit school in the 9th, 10th, 11th grade, and just never go back. If we can keep them in school and have someone counsel them while they’re there …, that would help a lot.”

Wilson said he is starting his own Bible study group for children in his area—and he’s starting with his own grandchildren.

“… Hopefully, they’ll find out more about Jesus, [and] their minds will change about violence,” he said. “If we can get more God in our children by teaching them, they will, in turn, do better.”

“The most important thing is, we need to ask [the youth] to develop a personal relationship with Jesus Christ,” she said. “Try to find yourself in a religious manner because the world is going to pot. With all this hatred and violence, we’re going to destroy ourselves.”

Debra Mays, president of the West End Manor Neighborhood Association, wants to revitalize her community by starting a program similar to one that was implemented in Ensley’s Oasis Gardens: she is working on developing a nursery to provide both fresh produce and employment opportunities for idle hands in her area.

Across Birmingham, several successful community-building efforts are underway. But other proposals, such as gun buyback programs, may not be quite as effective.

“I agree with the principles of the gun buyback,” Powe said. “But … coming from the streets myself, I know this is just not a strong enough method to stop the violence. You might get a couple of guns off the street. But as soon as you buy them back, they’ll be right back on the street because they’re so easily accessible.”

Neighborhood presidents wish young people would think before they act.

“If you need someone to talk to, reach out,” said André Brown, president of Fountain Heights in North Birmingham. “There are other alternatives than to want to take somebody’s life. … One day, you’ll have your own family, or this could be your brother or your sister, and the same thing could happen to them. So, why don’t you think before you make that choice?”

Many young people don’t understand the consequences of their actions, Cole said.

“You’re not going to blow me away today and see me again next week,” she said. “That seems to be the attitude—just kill him, and he’ll come back tomorrow. No. When you take someone’s life, it’s over. It’s final. You think you’ll be able to recuperate from that, but you [won’t]. … You’ve got to live with that, the guilt of what you did.”

Veronica Edwards-Johnson, president of Powderly in Southwest Birmingham, believes young people should use “sankofa”—one of her favorite West African words, which means “go back and get it”—as a mantra to live by.

“When something happens, stop, think, step back, and assess the problem before you move forward,” she said. “If you stop, step back, and cool down, then you won’t have these problems.” 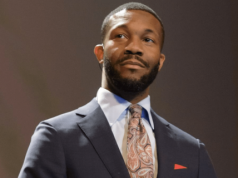