Earl Austin remembers playing tennis with a buddy at the Ensley Tennis Center when he spotted a young lady walking nearby. The Portland, Ore., native was more than impressed, telling his friend, “I’m gonna marry that girl.”

“That girl” was Betty Bailey, now his wife. They’ve been married 35 years, 34 in their current Pelham home.

Tennis has long been a part of their lives; each has played the sport for more than 40 years.

Earl, 68, and Betty, 66, will play mixed doubles in the 2017 National Senior Games in Birmingham, which begin Friday, June 2, with the Flame Arrival Ceremony, and run through Thursday, June 15. The Austins are among the more than 10,000 athletes, 50 years and older, set to compete in 800-plus competitions in 19 medal sports.

Earl remembers saying nothing to Betty after seeing her walking with James Lewis, the man for whom the tennis center in Ensley is now named.

Betty, a product of Birmingham’s Woodlawn community, turned and said, “I don’t know you.”

That didn’t last long. The two talked and danced, and Earl asked for Betty’s phone number—but he had to visit her church, Groveland Baptist Church in Woodlawn, to get it.

“It was close to Valentine’s Day, so I bought her a box of candy and a teddy bear and took it over to her. I got her number,” he said.

“[Damone] is really my stepson, but I don’t believe in step, so he is my son,” Betty said. “I was blessed to have a son I did not have to have. He came for the wedding and never left.”

The Austins have competed in state tournaments through the United States Tennis Association in singles, doubles, and mixed doubles competition. Earl has reached state tournaments several times, dating back to his playing days in Ensley. And Betty has had some noteworthy successes off the court.

“I was fortunate to be the first black president of the Ladies Interclub Tennis League of Birmingham. I was president for two years,” she said. “By playing tennis, I have been able to go to a lot of [predominantly] white country clubs.”

Serious tennis players are ranked by their skill level, based partly on the level of other players they compete against. Betty has been a level-4.0 player most of the past 10 years. The highest level, 7.0, is comprised of world-class players who are committed to tournament competition internationally and whose major source of income is tournament prize winnings.

When traveling, the Austins prefer to visit tennis courts at some of their favorite places. They always pack their tennis rackets when visiting places like Jamaica, Indian Wells, Calif.; Hilton Head, S.C.; and various locations in Georgia, Mississippi, and Florida.

“We’ve been all over playing tennis,” she said. “Normally, if we’re both going, we both take our rackets. That way we can play.”

Mixed doubles competition has done nothing to shake the bond between the two.

“Although we are married, we don’t argue like other married couples when they’re playing tennis,” Betty said. “We play for fun. We don’t worry about it.”

That’s not to say neither tells the other he or she should have gotten a shot “but once you say it, it’s over and done,” she said.

“When you walk off the court, you’re still married. That’s the main thing. We have the love. We win at love every day of the year.”

For schedules of events visit: http://nsga.com/schedule

Read more about the 2017 Senior Games
Birmingham hosts more than 10,000 athletes from across the U.S. for 2017 senior games,
Opening of 2017 National Senior Games energizes Birmingham 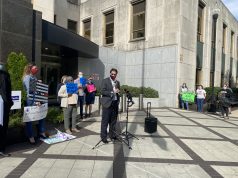