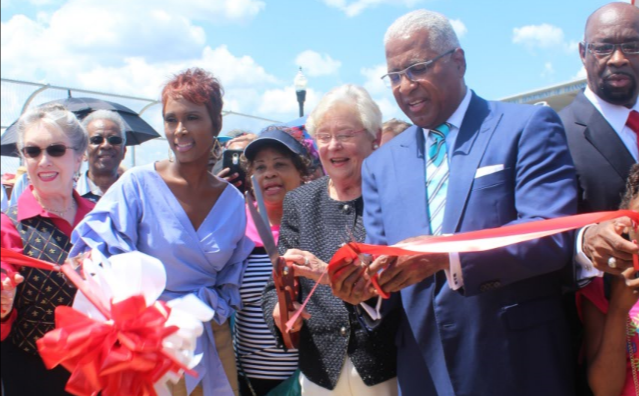 The bridge, located on Fred L. Shuttlesworth Drive, provides an overpass for motorists and pedestrians to cross over railroad tracks that have posed safety problems for area residents.

“Kids will be able to travel safely to [nearby Hudson K-8 School] and cars can travel safely over the [bridge],” said Birmingham City Councilman William Parker, who represents the district. “I’m excited about progress, I’m excited for the residents and the improvement in the quality of life.”

For years residents in the community have had issues with trains that blocked access to the neighborhood and at times forced children to climb over trains to get to school on time.

On Tuesday, Parker, son of the late Maxine Herring Parker, who represented the district as a member of the City Council, attended a ribbon cutting with a host of dignitaries including Gov. Kay Ivey, Birmingham Mayor William Bell, area residents and community leaders.

Ivey said she was proud to be at the opening of the bridge which will lead to “increase accessibility and safety” for the residents of Collegeville.

Bell credited the late Maxine Parker, who passed in 2013, for lobbying state and federal leaders for money to build the bridge. “She was like a rock of determination; she was going to have her way when it came down to getting this bridge funded,” Bell said.

Carolyn Monroe, who lives in Collegeville said, the bridge means a lot because the “kids don’t have to jump the trains [anymore on the way to school]. We were afraid they were going to get [hurt] going back and forth to school.”

She added the bridge benefits adults also “because they have to come out early and go to work and won’t get stopped by the trains” blocking the street.

The bridge connects Fred L. Shuttlesworth Drive from 29th Ave. North to 32nd Ave. North, over the railroad tracks and into the neighborhood.