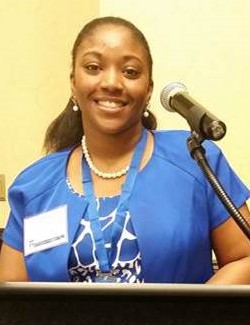 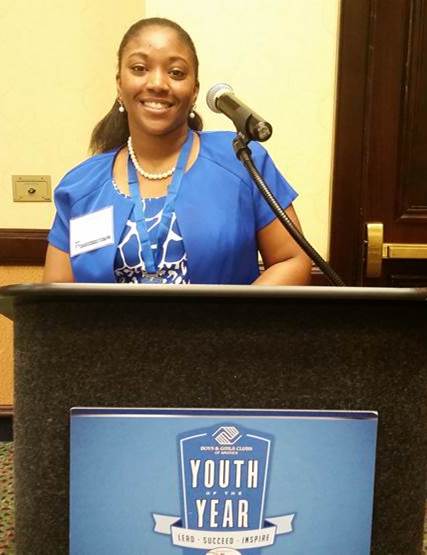 Gabrielle Dunlap, known as Gabby, never expected to be awarded A.G. Gaston Boys and Girls Club Inc. (AGGBGC) Youth of the Year in 2016.

“I was shocked, but I was happy to be given [the award],” she said. “It made me feel proud and important.”

Gabby earned the award at the end of her senior year at Midfield High School for her hard work and dedication to the club and the community.

Gabby, 19, who will begin her sophomore year at the University of Bridgeport in Connecticut this fall, said recently that her life has not always been easy, but the club has always been there, particularly when her father passed and her family’s house burned down.

Gabby began attending the AGGBGC when she was 6 years old. She wanted to attend because her older brothers were members.

“My brothers played football here and were members, as well, and I would come down with my mom to drop my brothers off,” she said. “They made it seem fun, so I definitely wanted to come down myself.”

Soon, Gabby found herself participating in activities like cheerleading, soccer, basketball, and swimming, and she started making friends. Shortly after joining the club, her father died in an accident.

“At the time, I didn’t really comprehend it because I was so young, [just 6 years old], but it seemed like it wasn’t real because I had memories [of my father].”

Though Gabby didn’t understand her father’s death, the AGGBGC was there to provide emotional support for her and her family. Her father also attended the club in his youth, and was well-loved and respected around the area.

“I used to get bullied and all the way up until about 4th grade,” she said. “When I realized that my father wasn’t coming back, … there was nothing I could do about it That’s when that experience really started to have an effect on me.”

Gabby said she had a hard time making friends in elementary school, but never at the AGGBGC, where she was active in sports and other programs. The organization helped her cope with the bullying and find ways to overcome her struggles. She became a stronger person, too.

“It’s taught me many life lessons,” she said. “[Losing my father] made me want to be more like him. He was remembered for always being such a happy person, a funny person, and such a joy to be around, so I just try to remember all the good things and try to be better. I’ve taken a bad situation and made it good for me.”

Gabby said she also received support after another loss—when her family’s home was destroyed by a fire in 2010.

“I felt like … losing my home made me appreciate things a lot more,” she said.

Gabby vividly remembers the day. She went to Arrington Middle School and began her regular routine: get out of school, go home, do homework, and go to the AGGBGC. On this day, once at the club, Gabby learned about the fire.

“I guess people who were passing by the house saw it,” she said. “… They were telling us, ‘Hey, we just saw your house up in flames!’”

Once again, the AGGBGC was there to support the family by donating clothes and other items, as well as again providing emotional support.

“It made me look at life differently,” Gabby said. “If you’re ever in a position to give, why not give? Being in a position where you don’t have and people are giving to you, it’s like, ‘Wow! People do care.’ … It made me appreciate the things I have.”

Gabby and her mother stayed in hotels after the fire, and then in an apartment while their house was rebuilt.

Gabby is still active with the AGGBGC and in the community. She currently works with the club as a mentor.

“[The AGGBGC] is home for me,” she said. “I really couldn’t see myself doing anything else, so coming back here is service for me. It’s just great to be back home.”