Tuesday, even as the area around the Legion Field polling station, a traditional Bell stronghold, was filled with Bell campaign T-shirts and supporters ringing bells, voters exiting the building were suggesting that this time, the final bell was tolling for the incumbent.

Significant numbers of voters of varying ages were indicating their support for Woodfin, the 36-year-old challenger. Bell’s defeat seems to have resulted from a number of factors, said political experts contacted after the election.

“The defeat of Mayor Bell fits the pattern of a classic upset,” said longtime Birmingham-Southern political scientist Natalie Davis, commenting by email from Spain. “I completed a mayoral poll during the summer and found that Bell was on his way to re-election, but he wasn’t at 50 percent. This happened to him before … where pre-election polls (including mine) had him at about 48 percent. If he couldn’t win it outright in the primary, odds are he would lose in the runoff.  Supporters of the losers tend to ‘gang up’ against the leader.”

Without question, Bell faced substantial opposition – 11 other candidates challenged him in the primary election, where Woodfin came out on top and the third-place finisher, Chris Woods, would later throw his support to Woodfin.

“In addition, Bell has been a fixture since 1979 when he was first elected to the city council” Davis said. “He was the young comer.  But at some point, politicians need to resist the temptation to run just ‘one more time.’  He didn’t, and he lost.”

A major factor in the election was a pronounced desire for change, which came out in comments from voters and the analysis by experts. It showed up in the mayoral election as well as in the city council and school board elections, which saw incumbents replaced by new faces.

Other experts agreed that change was in the wind. “I think the citizens of Birmingham sent a resounding message that they were looking for new leadership,” said Rep. Merika Coleman, a political scientist on sabbatical from Miles College. “It’s across the board – not just in the mayor’s office but also several of the city council seats as well.” 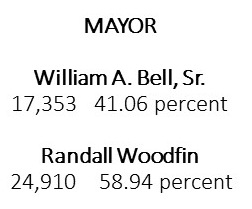 Coleman, who was first elected at age 28 in 2002, remembers how that desire for change assisted her campaign. “In 2002 there was this sentiment of wanting new and fresh. … So, we’ve seen this before. It literally is a political cycle. I don’t even think it’s really a blemish against Bell. People literally wanted something different and they showed that loud and clear.”

University of Alabama at Birmingham communication studies professor Larry Powell agrees. “It looks like the ‘it’s time for a change motif’ is playing full throttle here,” he said.

“Right now, we’re in an insurgent mentality. I mean, Roy Moore won the Republican nomination for senator. The voters seem to be, overall, in the mood of knocking out establishment candidates and putting in somebody who might offer some sense of change.”

But while Coleman believes the desire for change is a politically cyclical event, Powell sees in this election, a reflection of specific current realities. It’s not just a cyclical event this time, Powell contends.

“No, I think that’s weird. You frequently have a desire for change. The tendency to go to unusual candidates as the alternative is what makes it different. And Woodfin, in a way, would fall into that category in the sense that he is a young candidate with not a great deal of experience, particularly in city government. But he was out there talking about the things people wanted to hear talked about.”

There was also more than change at play, Powell said. Issues mattered.

“I really think that in terms of issues, Woodfin did an excellent job of focusing on neglected neighborhoods,” Powell said. “We know that the neighborhood concept is one of the leading vote motivations that you can get in any election and I thought that Woodfin played that to its maximum and did a great job with it.

“I think the fact that there was a verbalized focus made the difference. And Mayor Bell had some problems that were accumulating over the years including the perception that he was not quite in touch with what was going on in the communities.”

The effectiveness of the respective mayor campaign efforts also played a role, Coleman said. In contrast with Woodfin, she said, Bell did not run the best campaign.

“When this started out, people thought that this was Bell’s election to lose. Randall Woodfin ran one of the best campaigns that I’ve seen run in a long time. The messaging was on target,” she said. Woodfin appealed to the fact that many people “don’t feel empowered,” she added. “That’s not just the city of Birmingham, but nationally. Folks have not felt empowered. So, to put a message out there to say that ‘city hall and this office belong to you’ — that resonated with voters. They wanted to have someone that they could be accessible to.

“He went and met voters in their neighborhoods. He ran a 21st century campaign which included technology. But he also merged that with old school, plain old school, old fashioned grass roots. Any textbook that you read will tell you that one of the major indicators for people supporting a candidate or not, or supporting an issue or not, is personal experience or personal contact. And when he met those voters in their neighborhoods, shook their hands, listened to their messages and then said that ‘This is what I’m going to do when I become mayor of the city of Birmingham,’ it resonated well.”

In addition, Coleman and other experts noted, Woodfin managed to mobilize young voters who went to work putting him into office.

The Bell campaign, Coleman said, struggled to get its footing “around what their messaging was,” and they failed to undo the damage done with what she called “misinformation” about Bell’s legacy in the city.

With a new administration taking office, Linken said, politics in the city may also change. “I’d be curious to see, with the new school board, with the new city council, with the new mayor, how much of the institutional knowledge gets lost, how much politics changes, at least in terms of formal and informal relationships. Not in terms of what actually gets done, but in terms of how it’s done, just because all of those norms are going to be broken,” he said.

“He talked specifically about giving attention to the neighborhoods that some felt were ignored under the Bell administration. He has to produce, now. And I’m sure that because of social media, people … will hold him accountable.”

One area Coleman hopes the new mayor gives attention to involves healing the divisions of a hard-fought campaign.

“So now Randall Woodfin has a responsibility… to bring this community back together. And I’m hoping that that is the approach that he will take. The politics of the old school would penalize and be punitive against those people that did not support the victor. But I’m hoping that Randall Woodfin will take the approach of the peacemaker — that ‘Maybe you didn’t support me, but let me get to know you and get to know why. Let me show you what I have to offer to the city of Birmingham and now let’s all come together and do what’s best for this city.’

“That is the only way the city wins,” Coleman said. “If the city continues to be divided, the people of the city of Birmingham will end up being the losers.”