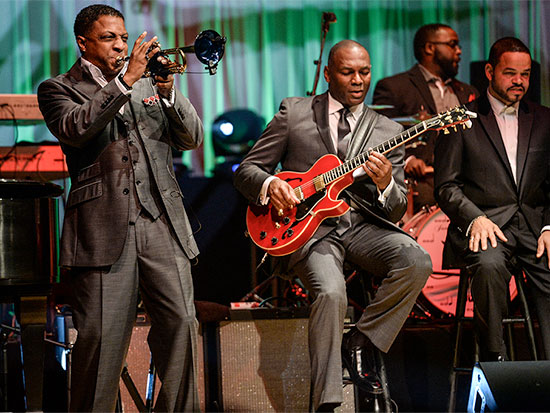 Welcome the season with the choral spectacular “Christmas at the Alys” on Monday, Dec. 4, at the University of Alabama at Birmingham.

Presented by the College of Arts and Sciences’ Department of Music, the concert features hundreds of singers as the UAB choirs and Trumpet Ensemble are joined by area high school choirs and the Steel City Men’s Chorus.

The performance begins at 7 p.m. in UAB’s Alys Stephens Performing Arts Center, Jemison Concert Hall. Tickets are $8 general admission and $5 for all students. Call 205-975-2787 for tickets. Contact the UAB Department of Music at 205-934-7376 or www.uab.edu/cas/music.

The annual “Christmas at the Alys” celebration began in 2001. The event has welcomed thousands of choral singers from the Birmingham community to perform together.

Every year, the concert seems to grow in interest and participation, Kittredge says.

“Since we have begun inviting special guest performances, many directors have reached out to ask if they can participate,” Kittredge said. “We are expanding our number of performing groups this year, in order to reach as many communities in the Birmingham area as possible. New to the program this year are the choirs from Hoover and Oak Mountain high schools. We are thrilled to have them all participate.”

‘“Christmas at the Alys’ signals the beginning of the Christmas season for my students; but more importantly, it provides a unique opportunity to collaborate with other choirs in the Birmingham area for a meaningful musical experience. It is so inspiring to be able to sing in such an amazing facility. It is the highlight of our year,” said Maria Wilson of John Carroll High School.

On Sunday, Dec. 10 at 7 p.m., Eric Essix and his musical friends will present a jazzy “Holiday Soul” show, at the University of Alabama at Birmingham’s Alys Stephens Performing Arts Center.