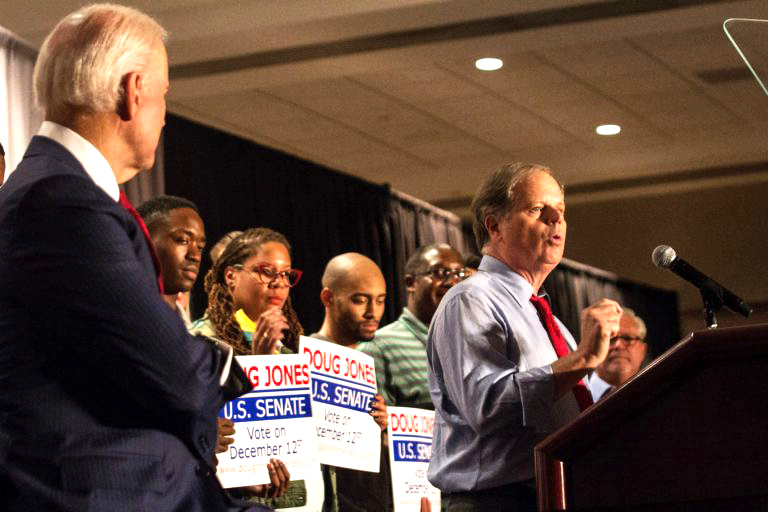 Through the first week of December, the Doug Jones campaign has served nearly 2,000 pieces of fish at fish fry get-togethers; staff and volunteers have made more than 800,000 phone calls; the campaign has knocked on more than 100,000 doors and the candidate had attended more than 180 events, traveling more than 7,200 miles across the state.

Here’s a look at how Jones has reached voters. (Efforts to reach the Moore campaign were unsuccessful.)

At a fish fry campaign event in Prichard last month, Jones was welcomed by a standing-room-only crowd at the William Clark Family Life Center. When he and his special guest, Georgia Congressman and civil rights activist John Lewis, entered the venue, the crowd erupted with applause and shouting.

Both Jones and Lewis spoke to the crowd. Lewis, a Troy, Ala., native, talked about his roots in the state and encouraged residents to get out and vote. He also spoke about the Democratic wins in Virginia in November and said he hopes the same thing happens in Alabama.

Jones hosted another campaign event along with the Bay Area Young Democrats and the Mobile chapter of the National Association for the Advancement of Colored People (NAACP) in downtown Mobile, where there was free showing of the Academy Award–winning Spike Lee documentary “4 Little Girls.” This film about the 1963 Sixteenth Street Baptist Church bombing was significant because Jones successfully prosecuted Ku Klux Klan members for their involvement in the heinous crime that killed four little girls in Birmingham.

Among the campaign’s outreach efforts is its “Women’s Wednesdays” Days of Action—women-to-women phone banks across the state. The effort, which has been conducted for five consecutive weeks, is a field program launched by Alabama women to help share Jones’s message of bringing both sides together in Washington, D.C., to focus on issues that matter to families. In addition to the phone banks, “Women’s Wednesdays” involves women sending postcards to their personal networks and other initiatives.

Jones visited and answered questions from seniors at Birmingham’s St. Martin’s in the Pines Senior Living Community, where he highlighted the importance of protecting access to essential health-care programs like Medicare and Medicaid, as well as the Children’s Health Insurance Program (CHIP) that helps provide coverage to more than 150,000 Alabama kids. He also promised to protect the Social Security benefits Alabama seniors have earned.

Jones followed the St. Martin’s appearance with a visit to the University of Alabama at Birmingham (UAB), where he highlighted his record as U.S. Attorney in Birmingham and provided an introduction to another screening of “4 Little Girls” and discussed his role in prosecuting Thomas Edwin Blanton Jr. and Bobby Frank Cherry, both of whom were found guilty and sentenced to prison in 2001 and 2002, respectively. He also spoke about his role in the prosecution of Olympic Park Bomber Eric Rudolph, who had also killed two people in the bombing of a Birmingham abortion clinic in 1998.

In Northport, Jones toured the Northport Medical Center outside Tuscaloosa and met with health-care providers. Following the event, he highlighted how he’ll work to reduce health-care costs in Washington, D.C., and help ensure that families have access to affordable care.

“Health care is broken, and Roy Moore’s extreme ideas will do nothing except jeopardize coverage and increase costs for hardworking families,” said Jones. “Our state deserves a leader who will work to find common ground and help ensure that Alabamians have affordable and accessible health care. Those [types of] those kitchen-table issues will be my priorities in the Senate.”