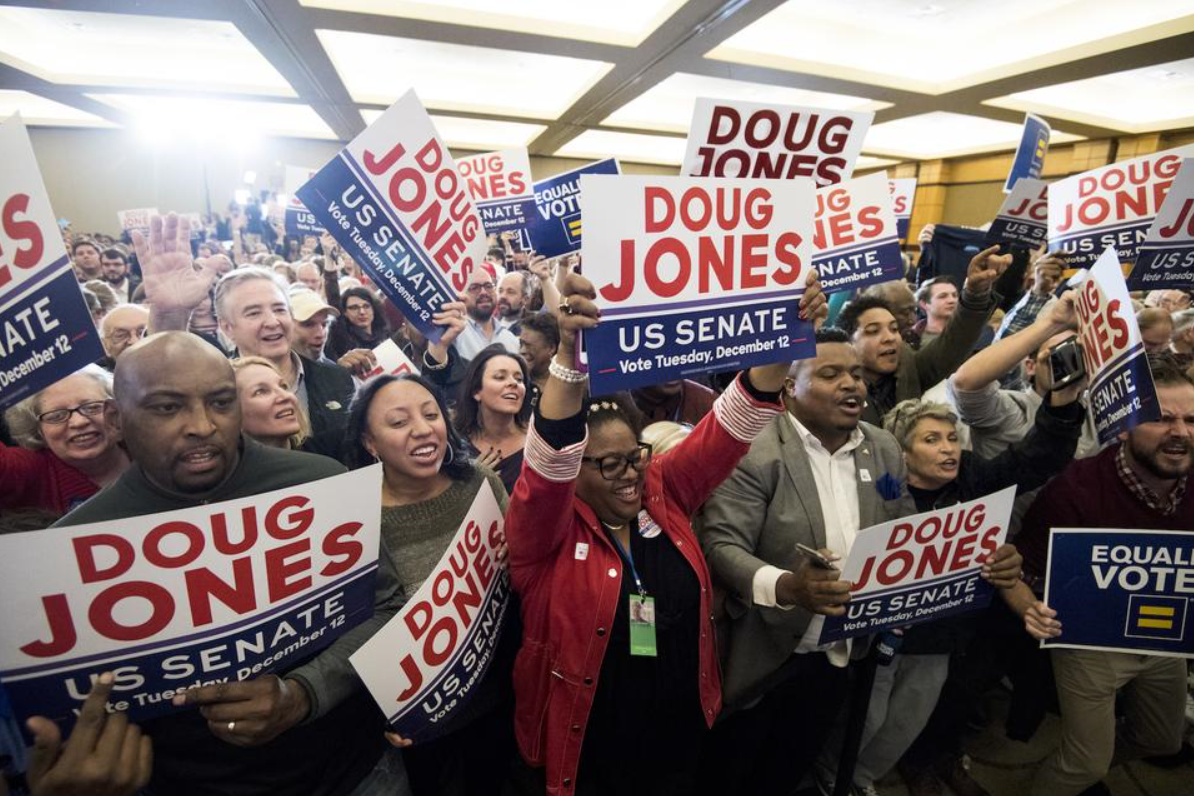 Before the Democratic operatives arrived … before the heavy television, newspaper and radio political advertisements hit the airwaves … a stalwart group of African-American women knocked on doors and called on residents across the deep-red state of Alabama.

“We have been doing this for the past three months,” said Catrena Norris, a Birmingham resident who is active with local politics. “We have been canvassing throughout Alabama, Birmingham, Montgomery, the Black Belt. … We had been doing that before there were any resources. We did it for free.”

She was not alone. Hundreds of other black women worked from offices in Mobile, Huntsville, Tuskegee, and other cities throughout Alabama to get Democrat Doug Jones elected to the U.S. Senate.

On Tuesday, Jones became the first Democrat to win any statewide office in Alabama since 2008. He defeated Republican Roy Moore 49.9 percent to 48.4 percent in a special election to fill the Senate seat left vacant when Jeff Sessions became President Donald Trump’s Attorney General. Democrats had not won a Senate race in Alabama since 1992.

During the campaign, volunteers for Jones wanted every citizen to understand the importance of the vote.

“Literally, you vote or you die,” Norris said. “We wanted to knock on every door we could and tell the people who answered those doors … that the world needs to hear us like they have in the past.”

In the 20 Alabama counties that saw a rise in turnout, compared with the 2014 midterm elections, Jones prevailed and in some cases dominated. That included larger counties, such as Jefferson, Montgomery, and Madison, and smaller counties, including Hale, Greene, and Macon.

“It was the ‘Power of the Sister’ vote,” said Birmingham City Council Member Sheila Tyson. “That’s what we called our movement. We were in 23 counties in the state of Alabama. We mobilized black women. We pulled data on all the women who hadn’t voted in the last four elections, we went to their homes, and we explained to them what they were losing by not voting.”

Many black women were sickened by allegations that Moore had pursued teen girls when he was in his 30s, Tyson said. “They all had issues with the alleged sexual assault,” Tyson said.

Exit polling found that 97 percent of African American women went for Jones. More than 90 percent of all black votes went to the Democrat.

The Jones campaign, leaving nothing to chance, paid as much attention to local voters as they did to those across the state.

“We were on every major corner in Southwest Birmingham and parts of Bessemer,” said Jefferson County Commissioner Sandra Little Brown, whose political organization, Team 7, backed Jones. “We even went into businesses. We started on Monday, and then we got up again at 6:30 a.m. on Tuesday and were back on our posts.”

The victory left many locals energized.

Turnout for the special election was higher than it was for Democratic presidential candidate Hillary Clinton in the 2016 general election. African-Americans made up nearly 30 percent of the electorate, surpassing numbers from the 2008 and 2012 presidential elections for Barack Obama in the state.

Something different was at play, Givan said: “This gives us a different kind of hope. It gives us the possibility of winning back seats in the U.S. House [of Representatives], in the Senate. It gives Democrats an opportunity to strengthen themselves in the state house, in county seats. It shows that we are not dead if we pull together.”

Hezekiah Jackson IV, president of the Metro Birmingham chapter of the National Association for the Advancement of Colored People (NAACP), said he was not surprised by Jones’s huge margin of victory, 68 percent to 30 percent, in Jefferson County—home to Birmingham, the largest city in Alabama.

“Jefferson County has been ground zero for practically all the dramatic changes and progress that have happened on behalf of all minorities in the state,” said Jackson, who has served as president of the NAACP Metro Birmingham chapter since 1998. “It’s a watershed moment and for us to recognize that collectively we can make a difference. Our theme was simple: we pulled in same direction. We understand how Alabama is supposedly so red.

“We understand how the majority of the people here have a certain mindset. But [what was at stake during this election] was just too much. We all pulled together [because] what we saw in Doug Jones was an opportunity to make a statement that we matter.”

The results sent another message, too, according to Givan.

U.S. Rep. Terri Sewell, who played a key role in the campaign, said Jones made history because Alabama voters turned out in record numbers and “decided to put character and integrity over party affiliation. Voters last night opened a new chapter for Alabama, placing our state on the right side of history,” she said

CNN and The New York Times contributed to this post.